Unless you are new to the world of automated website testing, you must know about Selenium. It is an open-source automated testing framework used for validating web applications across platforms such as Linux, macOS, and Windows and browsers like Safari, Chrome, and Firefox.

Jason Huggins, a ThoughtWorks engineer, created Selenium in 2004 when he realized the web application he was working on required to be frequently tested, and its manual testing became increasingly inefficient.

To tackle the problem, he created a JavaScript program that automatically controlled the browser's actions and aptly named it "JavaScriptTestRunner." After seeing the potential the testing framework had to automate other web apps, Huggins later renamed it Selenium.

Any software application's success rate depends on how efficiently it works. Imagine if Amazon's mobile application keeps crashing or Ebay's website is down most of the time—such businesses will lose customers and have to deal with a tarnished brand reputation.

As the name suggests, manual testing involves testing the app manually. QA testers need to run the app in various environments, using different data sets, and the performance of every transaction needs to be recorded. This makes the testing process lengthy and prone to errors.

Automated testing tools, on the other hand, require limited human intervention. They also support regression and functional testing frameworks. Plus, the tests can be carried out quickly—in some cases, even scheduled to run them during a particular time of the day.

Selenium was developed to overcome the limitations presented by manual testing of the web apps. In the next section, we will discuss the features of this testing framework: 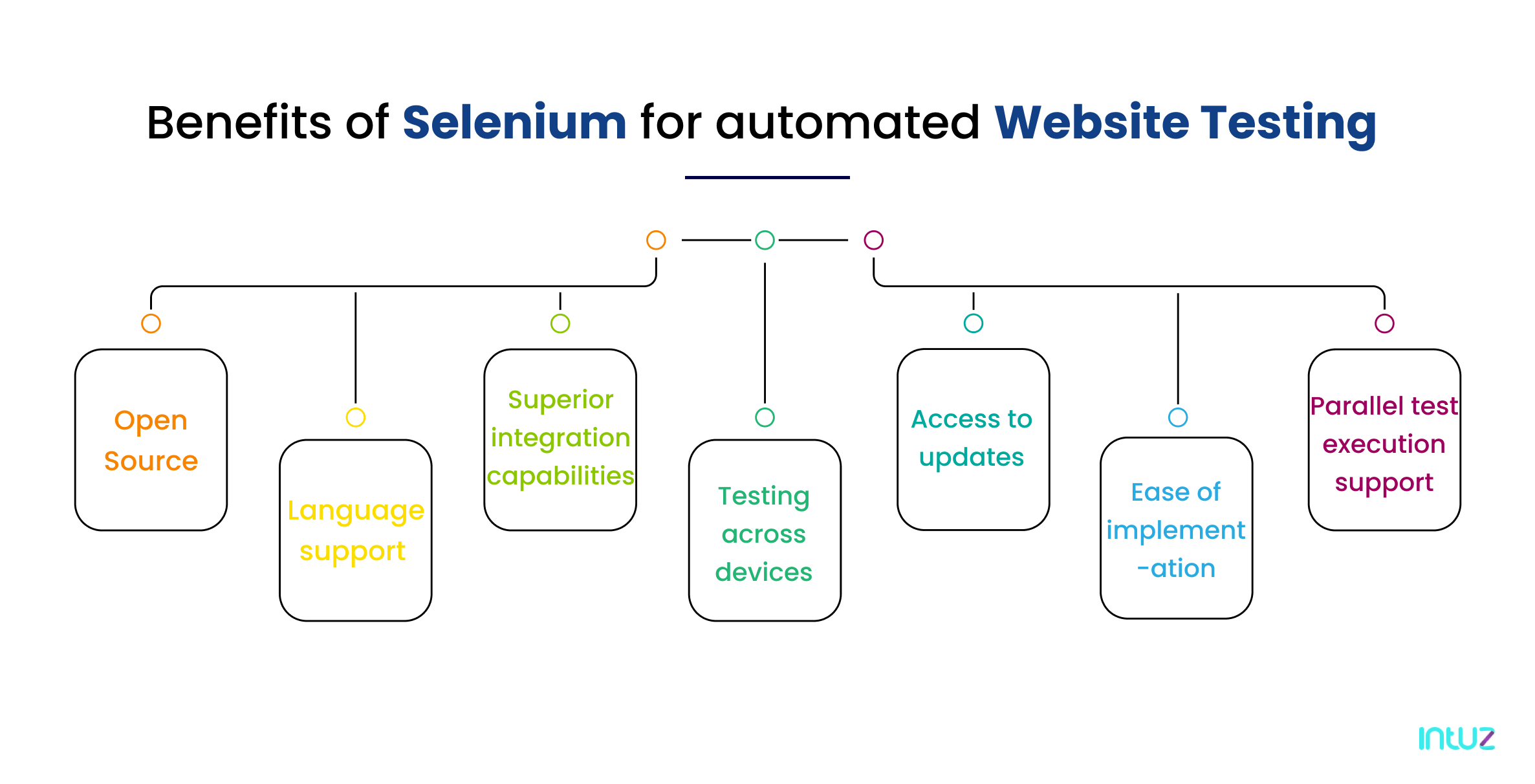 Since Selenium is open-source, no licensing fee is involved, which is a significant plus compared to other automated testing tools that come at a cost.

Developers can write test scripts in many programming languages such as Python, PHP, Ruby, .Net, C#, and Java. Besides, it has its scripts, which are not limited by any language.

So, developers have the flexibility to run tests in languages they are comfortable with. Selenium enables the creation of complicated and high-level automation scripts of frontend frameworks.

Selenium is one of the few automated testing tools that can be integrated with various programming languages and frontend frameworks. For example, it can integrate with Maven and ANT for source code compilation.

Plus, it can integrate with Hudson, Docker, and Jenkins for continuous automated website testing. Not to forget - Selenium also integrates with both TestNG and JUnit for test case management and report generation.

Selenium can also be used for testing mobile web apps on Android, iOS apps, and Windows. This not only addresses issues continuously but also helps generate necessary results to keep the apps functioning correctly. It basically takes care of the end-to-end testing stage, leaving developers with more time to do high-level jobs.

Selenium has an active community that enables constant upgrades in the testing framework. These upgrades are readily available and do not require any kind of training to use. That makes Selenium extremely cost-effective and resourceful for companies.

The best part about Selenium is its user-friendly interface that helps create and execute tests effectively. Developers can script their extensions, enabling them to customize actions while testing and manipulating the testing framework at an advanced level.

The automated website testing by Selenium runs directly across browsers and platforms, and developers can view the testing process as it happens. That means the testing framework offers excellent parallel test execution support. It covers all aspects of functional testing by implementing add-on tools that broaden the scope of testing.

Selenium mainly consists of a suite of four tools, namely: 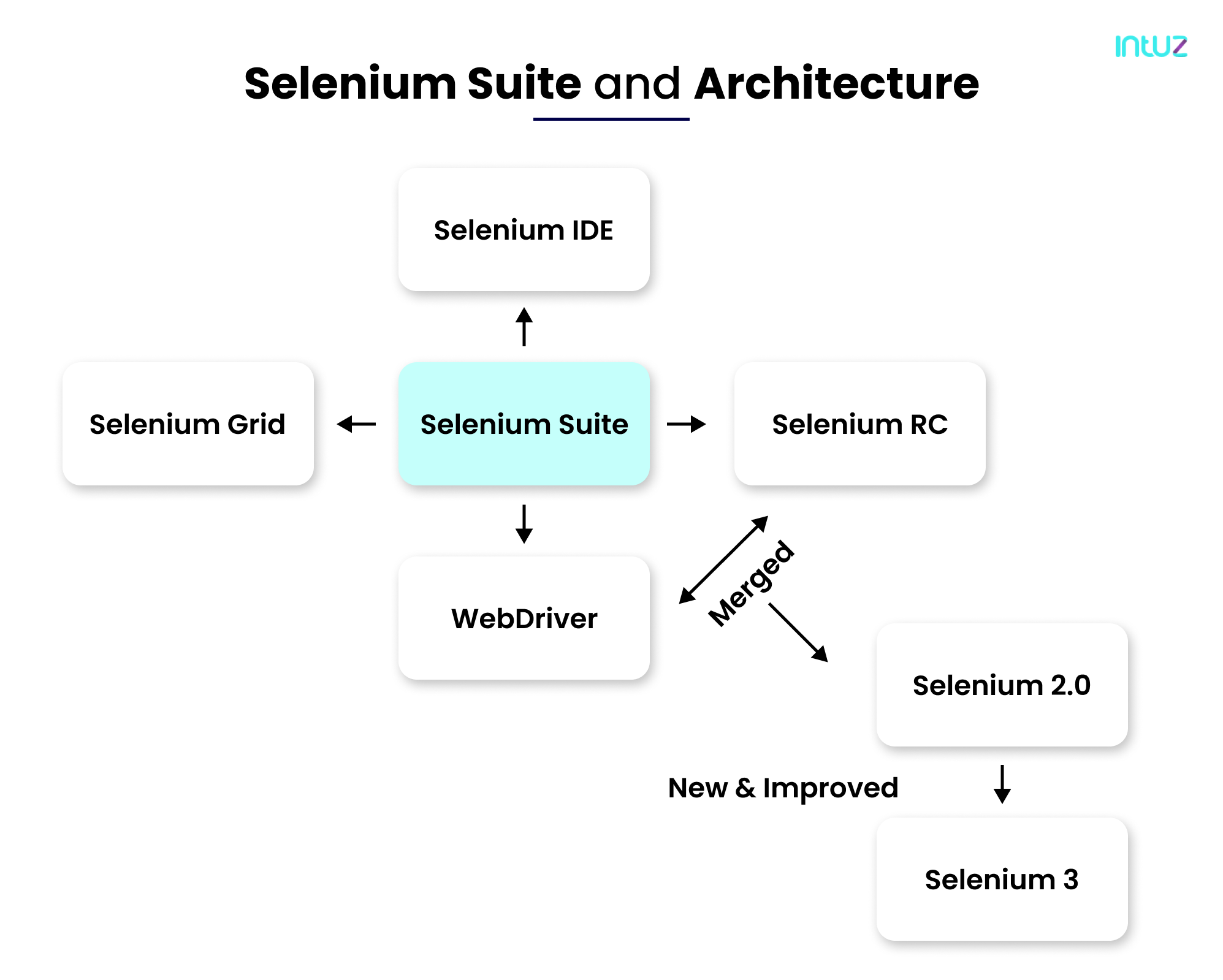 Let us now try to understand the functionality of each tool in greater detail.

This is a Firefox plugin, created in 2006, which automates the browser with the record-and-playback functionality. However, because of its simple testing framework, Selenium IDE should only be used as a prototyping tool and not for building advanced test cases.

Originally, testers using Selenium had to install the whole application being tested and the web server on their local computers.

This was because of the Same Origin Policy that prohibited the JavaScript code from using elements from a domain that was not similar to where it was launched.

Selenium RC, developed by another ThoughtWorks engineer, is a server that acts as an HTTP proxy to trick the browser into believing that the web app and Selenium belong to the same domain. That makes automated website testing hassle-free.

This is the first cross-platform, automated website testing framework that controls the browser from the OS level. It implements a more stable approach to automating the browser's actions and does not rely on JavaScript for automation.

Subsequently, Selenium RC and WebDriver were merged into a single framework to form Selenium 2, whose improved version is called Selenium 3.

Selenium Grid was developed with just one task in mind - to minimize the test execution times as much as possible. It made that happen by capturing browser screenshots during significant stages of the testing process and parallelly sending Selenium commands to different machines.

When writing a Selenium test, it is necessary to identify the elements you want the test to interact with. Seven essential elements apply to any Selenium test case and web app under test (AUT):

You can do so by using a constructor for a specific web browser. Assign the instance to a variable when you create it and use it to invoke methods, which, in turn, help you access other interfaces used in basic steps.

2. Navigate to a web page

3. Identify the HTML element on the web page

From text input elements to button specifics - locating HTML elements will help you perform multiple actions such as entering text or clicking on the concerned web page.

4. Act on an HTML element

Once you have identified the HTML elements you want your test to interact with, the next step is to perform an action, which could be deployed through specific methods, such as:

5. Anticipate the browser's on the action

When you click a "Submit" button after filling a form on a website, you know you have to wait for at least a second or two for your action to reach the server and to receive a response from the latter. The fifth step ensures the action reaches the server, and the end-user is intimated about the action taken by them on the web app.

The biggest aim of your test script is to run the test correctly and record the results. Evaluating the function and performance in AUT—without human intervention—is what automated website testing is all about. For the same, you can use testing frameworks of different programming languages, such as JUnit for Java, RUnit for Ruby, NUnit for C#, and so on.

Concluding the test is easy! You can do so by invoking the QUIT method on the WebDriver interface instance. There are two ways to do that:

Use cases of Selenium

To leverage this testing framework's maximum potential, it is vital to consider scenarios when it can positively impact. Below mentioned are the three most common use uses of Selenium:

This is an elementary use case for any web app in which the user logs in and receives a message upon successful authentication. Two things need to be tested:

To ensure the login works, developers need to use large volumes of data to test different permutations of the login data and check how the functionality will perform on different browsers and work environments.

Since Selenium can run parallel tests, it reduces significant time, money and resources for the company and also does top-level reporting about whether the testing was successful.

Another area where Selenium can help is when developers are looking to test as early as possible in the software development lifecycle. Doing this can help catch bugs and prevent future glitches in the web app.

Selenium enables the integration of the web app with notifications platforms such as text or email. All the team's relevant people are updated concerning any glitches that may arise and can resolve them more efficiently.

Manual testing does not offer testing at scale. That means it often neglects those areas in the web app where testing is essential. No wonder, it is more prone to vulnerabilities and flaws.

Selenium, as mentioned before, can run multiple test scenarios simultaneously, including different browsers and configurations. It handles even more complicated test scenarios involving iFrames and "if" conditions. When you consider test coverage in both quantity and quality, automated testing tools can fetch a more considerable ROI.

Selenium vs. QTP vs. RFT - which is the best testing framework?

Sure, Selenium is the preferred automated testing tool in the market for its tenacity. However, other testing frameworks are equally brilliant, and offer different advantages to developers and testers. Our next section runs a comparison of two such tools with Selenium. 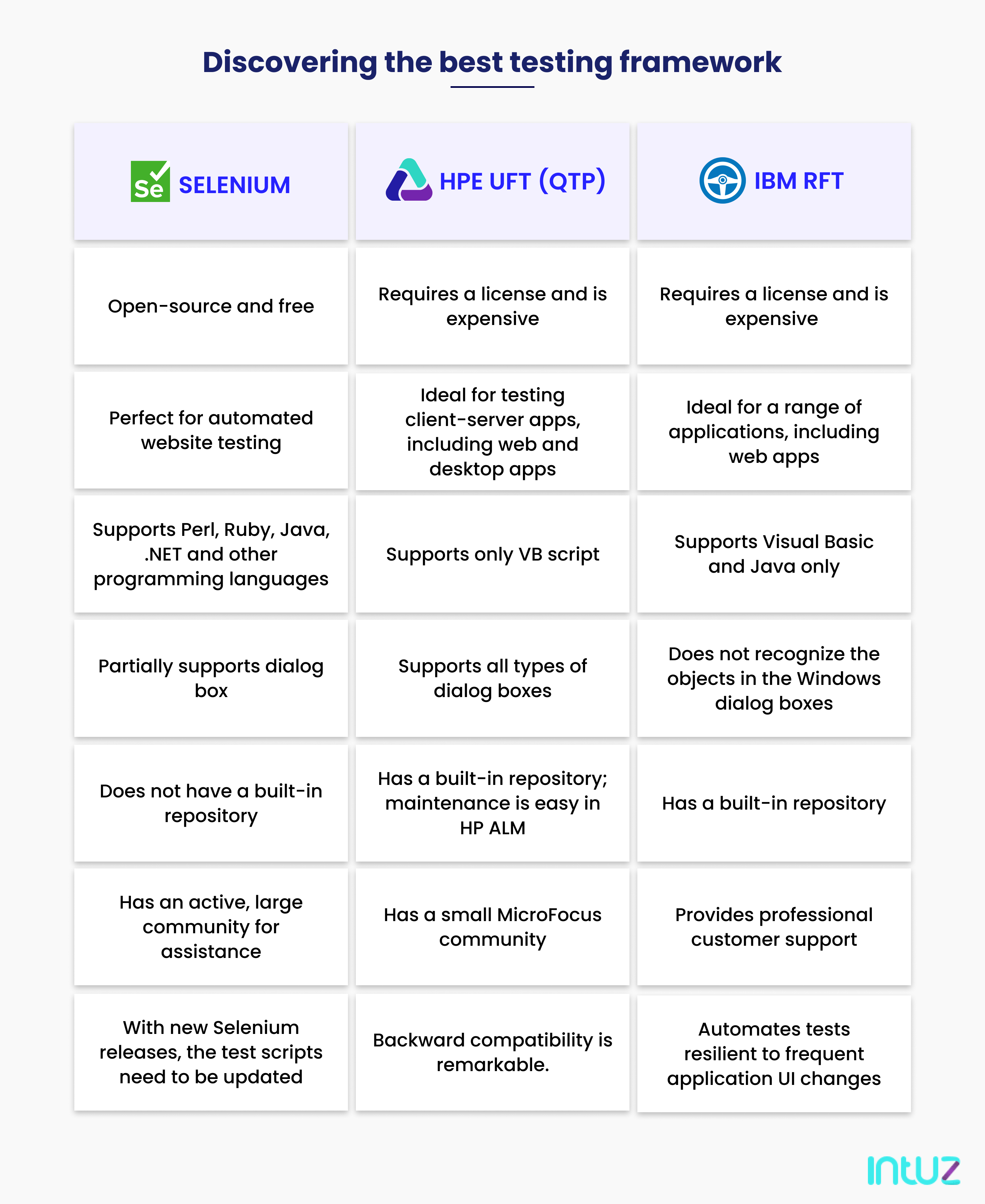 There is no doubt that Selenium is for web developers who want to spend less time testing the frontend frameworks of their web apps and still be sure of the output they deliver. It is the perfect automated testing tool to get started with!

Selenium will save time by automating repetitive tasks and ensuring the job is done efficiently and accurately. To efficiently use Selenium, possessing advanced programming skills, and working your way through to build automation libraries and networks are a must.

The QA testers and developers are hands-on when it comes to automated website testing. If you need any help, Intuz is at your service. Please share your query with us here.