A Complete Guide And Comparison Of MVC and MVVM

Do you know what a mission-creep is for mobile app developers? Using the right data model! Just as architects consider blueprints to construct a building, developers use data modelling to map all the mobile app attributes into a data structure.

A data model documents necessary jargon and concepts and provides a foundation for long-term maintenance. The best part is it consumes less than 10% of a project budget by simplifying the software complexity and fetching insight into the project risk.

Without proper data mode, 70% of the software development efforts tank on average.

Whether it is about Android application development or iOS app development, mobile app developers risk writing codes in an unstructured manner without a blueprint.

That might increase the number of code lines, thus making it difficult to understand. Therefore, a seamless data flow must use event-driven architecture in Android application development, which boosts scalability, bug resistance, and robustness.

The thing is, no matter how crisp the software code is, the consumers will never interact with it; instead, they will interact with what the codes will accomplish. 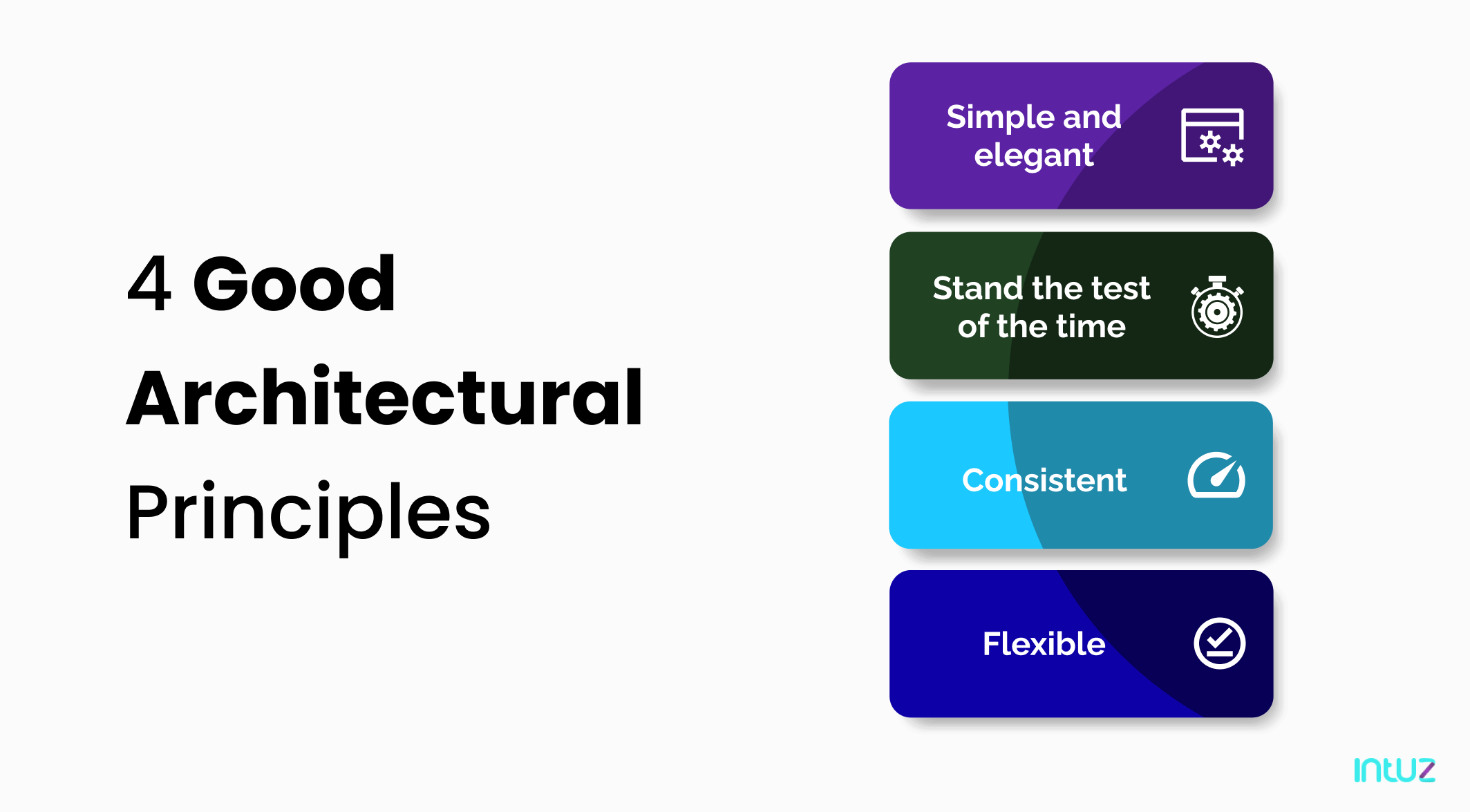 For instance, they are more interested in basing their mobile app experience on the number of clicks it took them to navigate, sign-up, or read something on it. It's all about the ease-of-use.

That's where Model-View-Controller (MVC) and Model–View–ViewModel (MVVM) enter the picture as they are the two most popular architectural patterns that developers follow for making mobile apps.

They offer proven solutions to consumer problems, save building and testing time of developers, and accelerate the entire iOS app development process. It would just take the consumer a minute to understand what needs to be done on the app with common UI design patterns.

This article will study the terms in detail and compare them to understand which one's better. Therefore, without further ado, let's dive in:

MVC architecture was first introduced in 1987 in the Smalltalk programming language, but it wasn't until 1988 until it was accepted as a general topic. It was traditionally used for desktop graphical user interfaces (GUIs), but its usage has moved to web apps in recent times.

The framework is an architectural pattern that categorizes the mobile application into three main components - Model, View, and Controller - developed for specific test-driven development app aspects.

The Controller sits at the same level as the View, listens to the events from both Model and View, and regulates actions between them. In a nutshell, the Controller is responsible for addressing all the events of the app. 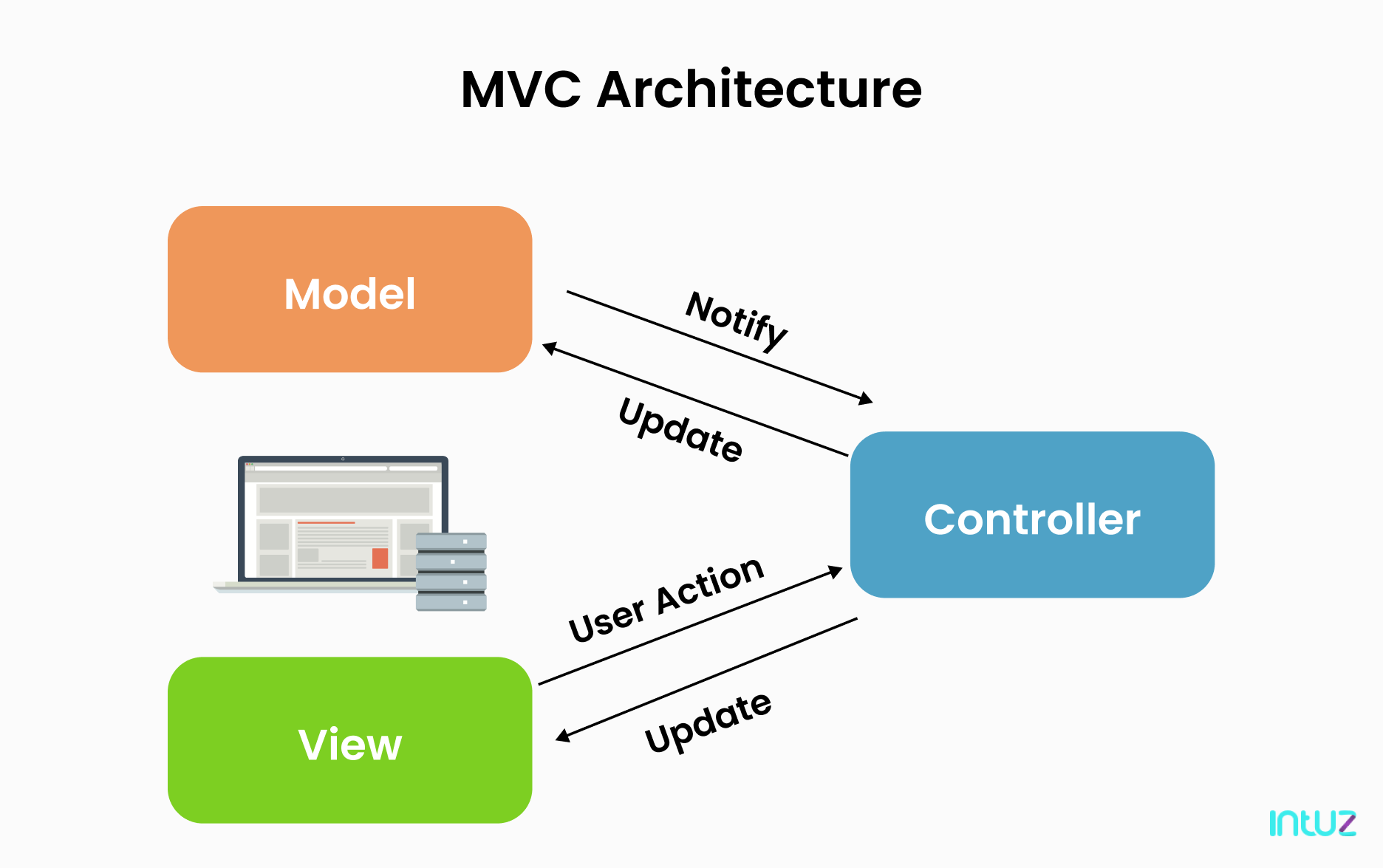 As you can see in the image shared below, it fetches input from the users (View) and then transmits it to the Model, after which it shares the result to the View.

The View defines the display (UI) of the app. It presents data to the consumer in the form of diagrams, tables, and charts. View handles consumer interaction with the mobile app. The data gathered by Model create Views. A consumer's View includes UI components such as dropdowns, text boxes, bread crumbs, and more.

This is the interface between Model and View and contains control logic by interpreting keyboard and mouse inputs from the user. That way, it informs the Model and Views to change as appropriate. For example, a Controller commands Model to update an action - for example, saving a specific document or adding a product to the cart.

The Controller also commands View to change the associated presentation - for example, scrolling a particular document or showing the added product to the cart

With better clarity on the patterns, let's analyze the features, pros, and cons of MVC in-depth: 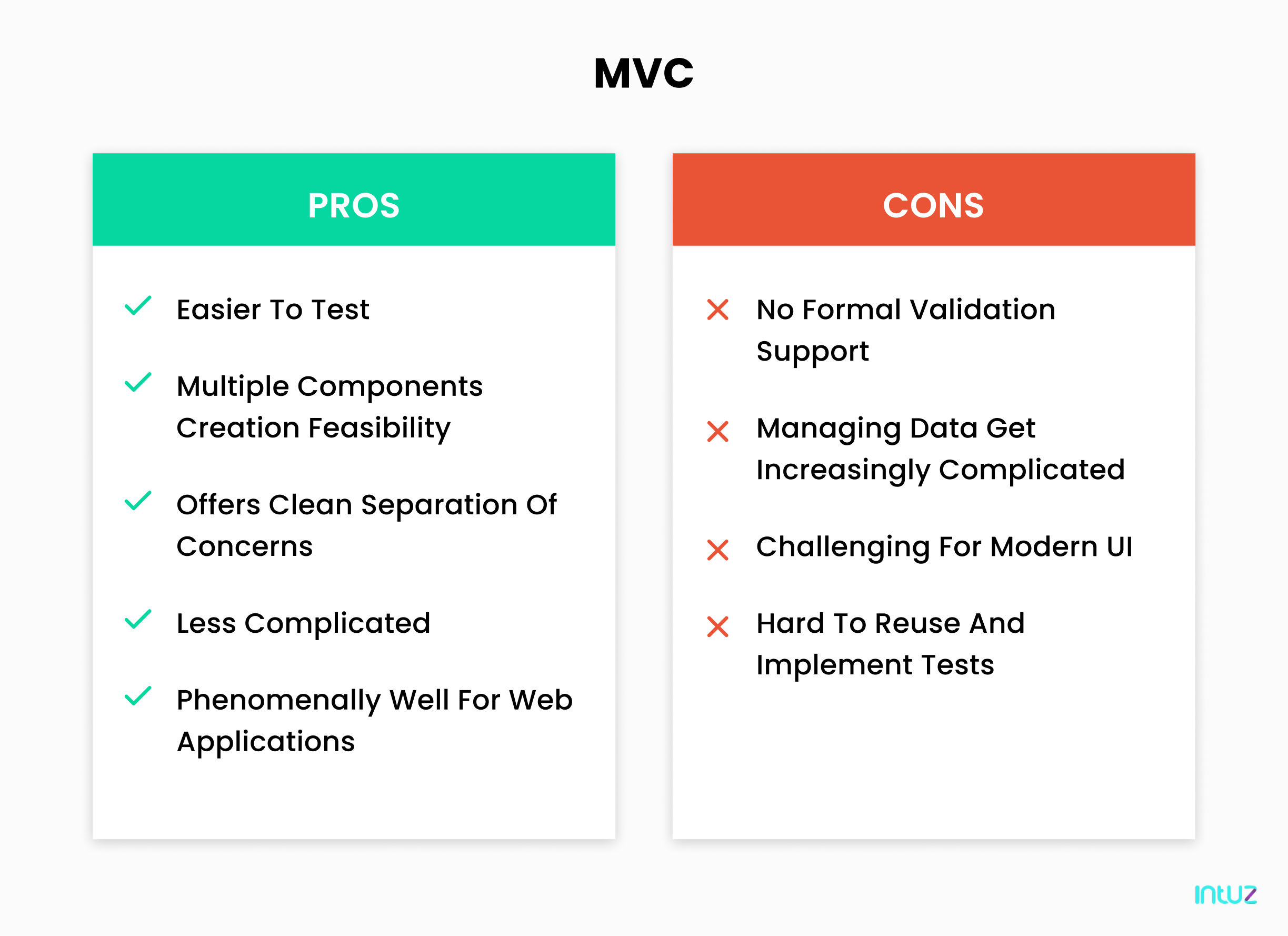 Since MVC has been in the picture of iOS app development for a very long time, it is often interesting to know the frameworks which are based on MVC. That also works for Android application development.

Since MVC has been in the picture of iOS app development for a very long time, it is often interesting to know the frameworks which are based on MVC. That also works for Android application development.

Imagine a scenario where web designers have the flexibility to take on design and test-driven development tasks simultaneously. Or when they can change the UI without having to consider other logic in the codebase. Well, it turns out, the MVVM framework can make that a reality.

The framework comprises a software architectural pattern that facilitates graphic UI development from the back-end and business logics' test-driven development. That way, the View is not dependent on any specific model platform.

It offers two-way data binding and command transmissions between View and View-Model. It creates View-specific subsets of the Model comprising logic information and state and removes the need to display the complete Model to View. The View-Model updates the Model, and the Model sends notifications to View-Model, which, in turn, notifies the View. 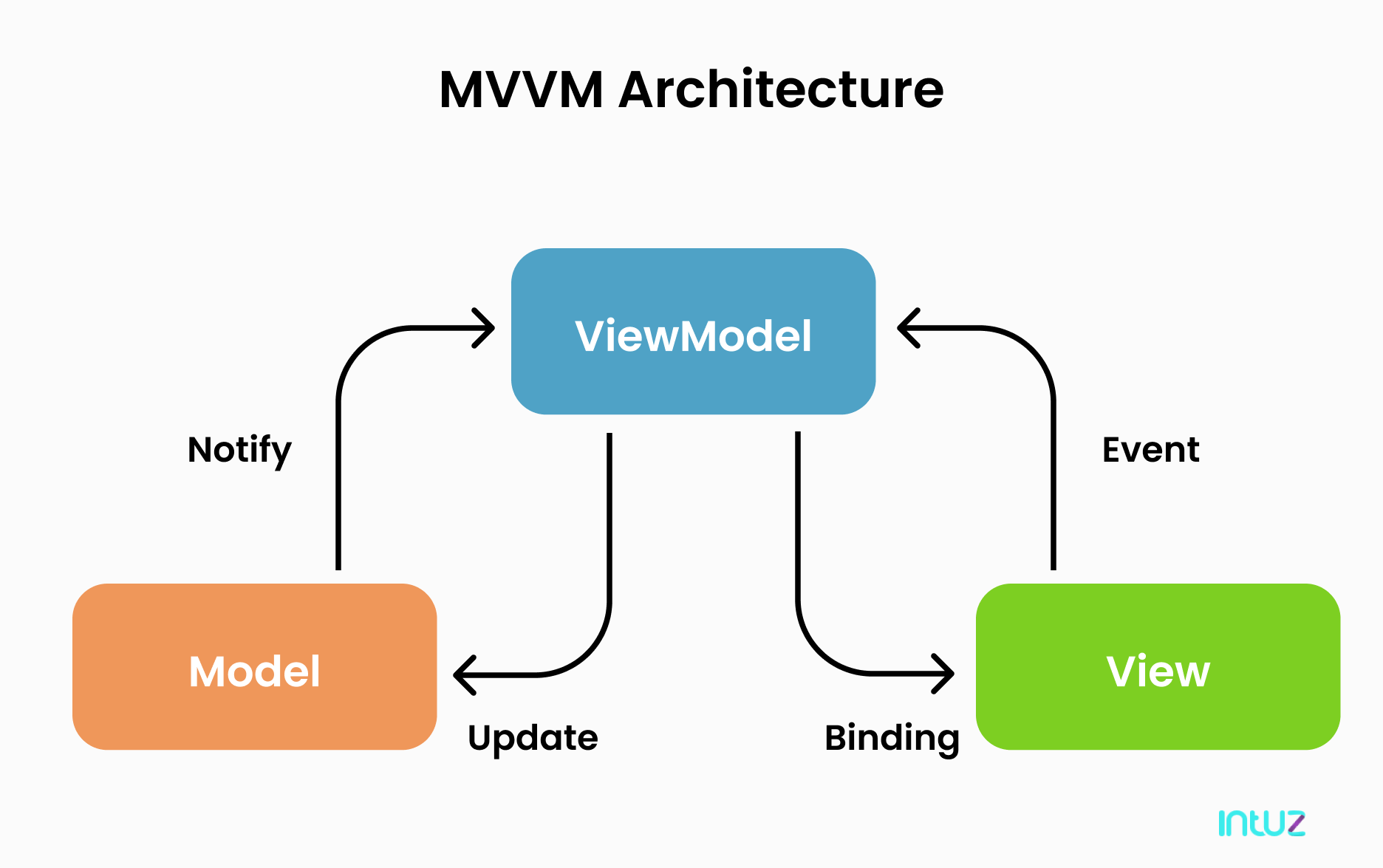 Let's understand the components in detail:

The Model stores data and logic, which means it encapsulates the data and behaviour and the application domain's action. It merely holds the data. For instance, if the View-Model helps retrieve customer information from the database, it manipulates the data and either uses it to render the same data or sends it back to the database.

As the name suggests, it is the link between Model and View. It is responsible for presenting functions, methods, and commands that support the state of the View. That means it retrieves data from the Model and shows it to the View.

Like MVC, View defines the display (UI) of the app and stands for JQuery, CSS, and HTML components. It presents data to the consumer in the form of diagrams, tables, and charts. View handles consumer interaction with the mobile app.

For instance, if the consumer adds a product to the shopping cart, the View enables them to see the cart's added product. In a nutshell, Views are created by the data gathered by Model.

A consumer's View includes UI components such as drop-downs, text boxes, bread crumbs, and more. The View transforms the Model to UI.

Now that there is an understanding of how the framework functions, it will be interesting to check out MVVM's features, pros, and cons. Please have a look: 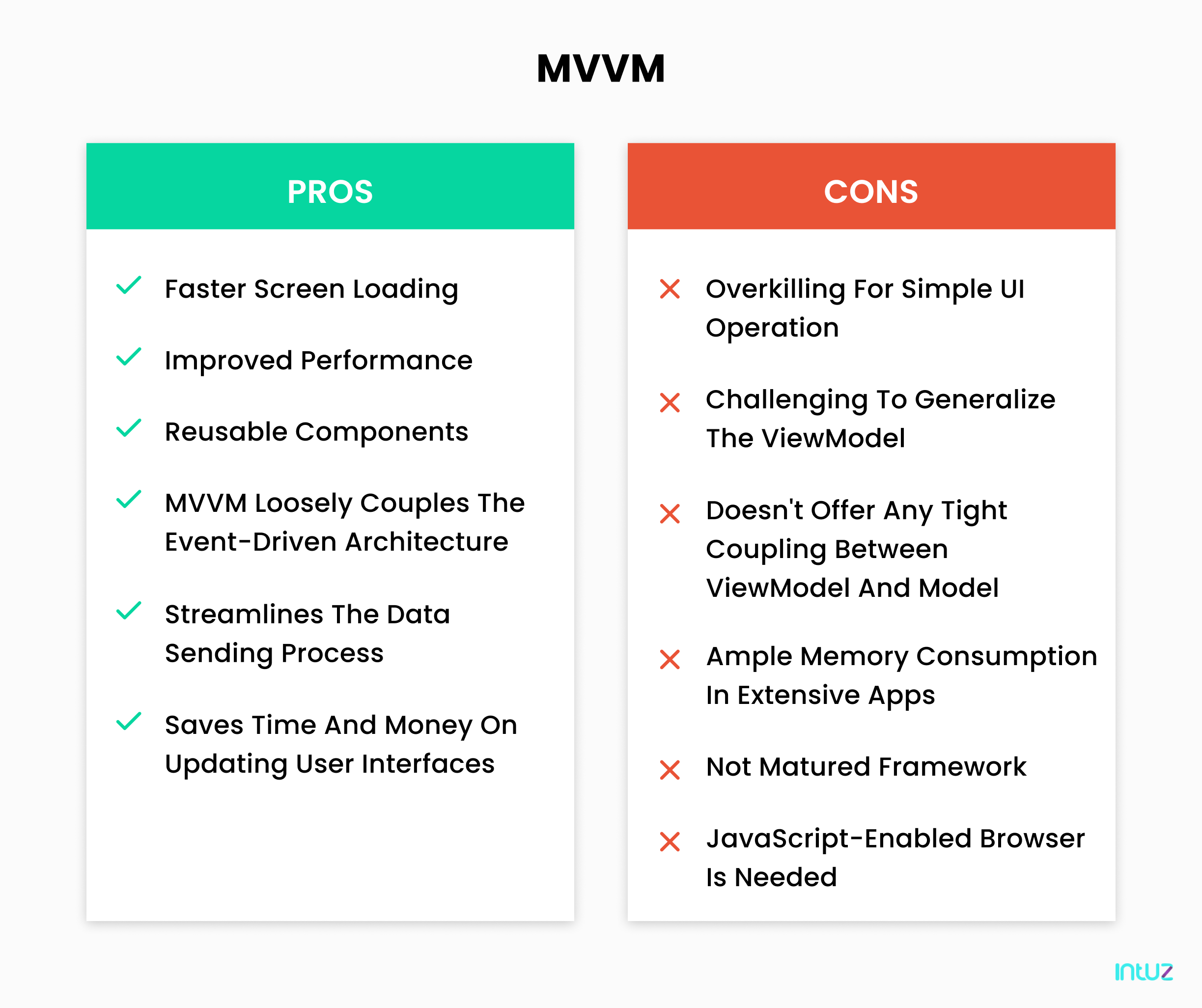 Although a newbie in the app development market, some powerful MVVM frameworks include MVVM Light, Caliburn Micro, and Prism. Google currently deploys the MVVM framework.

Differences between MVC and MVVM

While both frameworks have their advantages and disadvantages, it is also essential for developers to understand the differences between the two. We have prepared a bird's eye view: 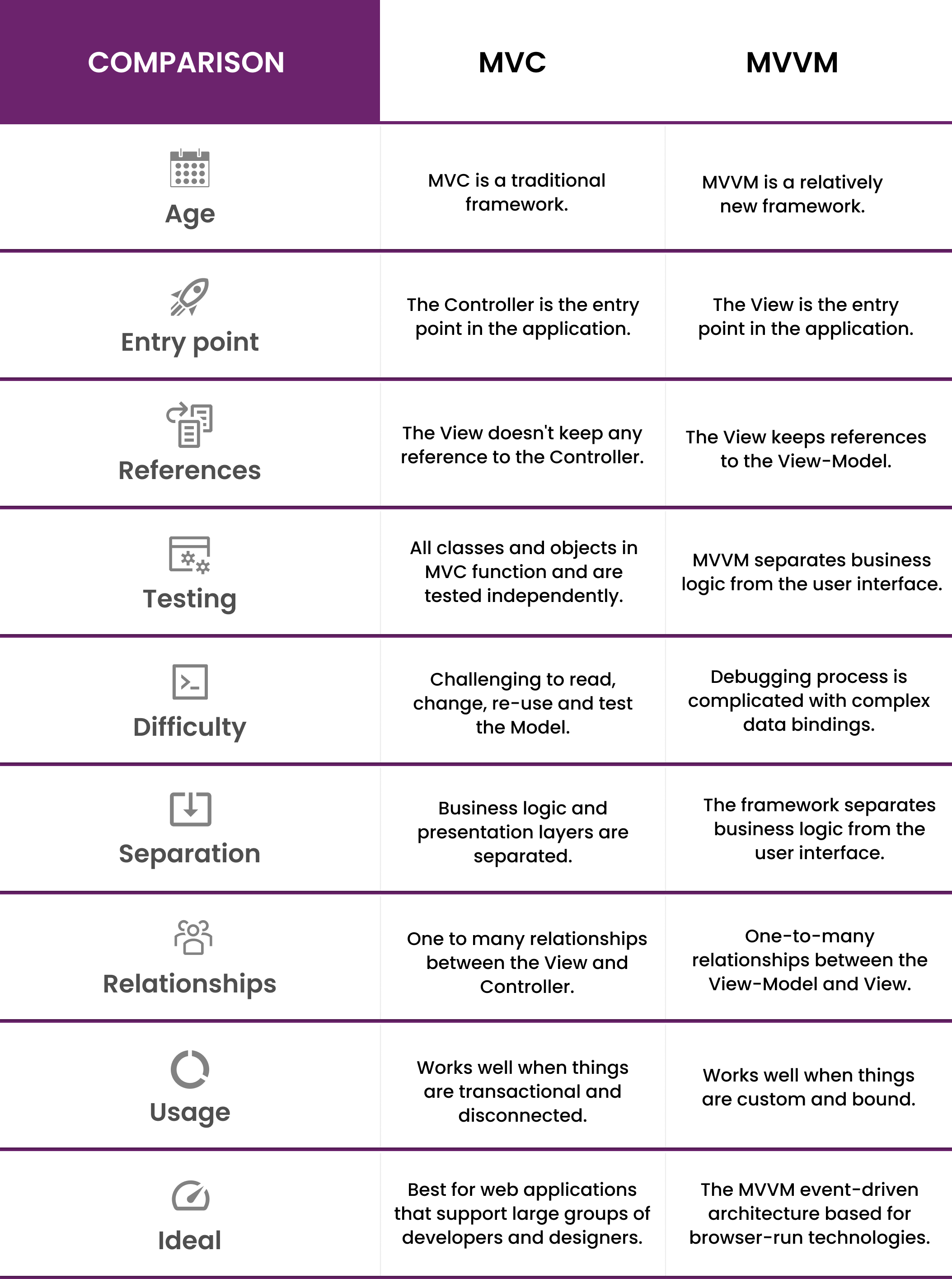 In the last two decades, the variations of websites and iOS app development and Android application development have evolved dramatically. That is so because of the exponential growth of programming languages and the transformation of our computing power.

That has inevitably given birth to many new codebases and event-driven architectures to create a website or mobile app. While there's no right or wrong way the software codes can be structured, it is crucial to understand which framework would work better.

MVC and MVVM are both winners. So, if you don’t know which one to choose and need a helping hand, please contact our expert team at Intuz for custom mobile and web development solutions today!