Laravel vs. CodeIgniter: Know The Difference Between PHP Frameworks

To create websites that stand the test of time, developers must have their hands on deck. Thankfully, there are two prominent web development tools that offer simplified website maintenance services and ensure faster development and deployment of websites.

While Laravel and Codelgniter offer ample flexibility in terms of a structured coding pattern with scope for building high-performing website applications, both frameworks are unique in their ways. This blog attempts to dissect both in detail, as well as chalk out the main differences.

Every business strives to have an interactive and well-structured website. Why you ask? For starters, it gives them a platform to market their offerings. They get to gain consumer insights by tracking visitor behaviors. In the long run, a website helps a business in gaining more digital footfall, boosts their brand credibility, and delivers a 24*7 online presence to their target audience. Of course, if you are thinking of getting one developed today, it can get a bit overwhelming.

That is because there are many web tech tools in the market you can use. One of the most popular ones from the lot is PHP, which is used for building out-of-the-box and customized static and dynamic websites, and web applications without much hassle.

PHP is short for Hypertext Preprocessor but earlier stood for Personal Home Pages. Simply put, it is an open-source, server-side scripting language, which is executed on the server. It provides a firm base for nearly 80% of the programming framework.PHP is compatible with all major Operating Systems such as Windows, Linux, and macOS. It performs various actions such as server-side scripting, email sending, command-line scripting, providing content to HTML pages, writing desktop applications, and so on.

With time, the never-ending popularity and benefits of PHP resulted in the birth of several robust frameworks such as Laravel and CodeIgniter

Laravel is a popular open-source framework that takes the pain out of development by handling a bunch of common tasks undertaken in the majority of web projects. These tasks include server-side routing, HTML authentications, readying template systems, caching, and so on.

The framework also offers reusable PHP components and libraries that allow the easy creation of website applications with pre-defined infrastructures along with a range of features such as personalized backend logic, templates, full-stack apps, and a web portal.

Moreover, Laravel saves the developers valuable time and helps them automate repetitive tasks with elegant and expressive syntaxes. As of today, the framework holds 0.29%  of the market share, with over 68,500 websites being built using Laravel worldwide. 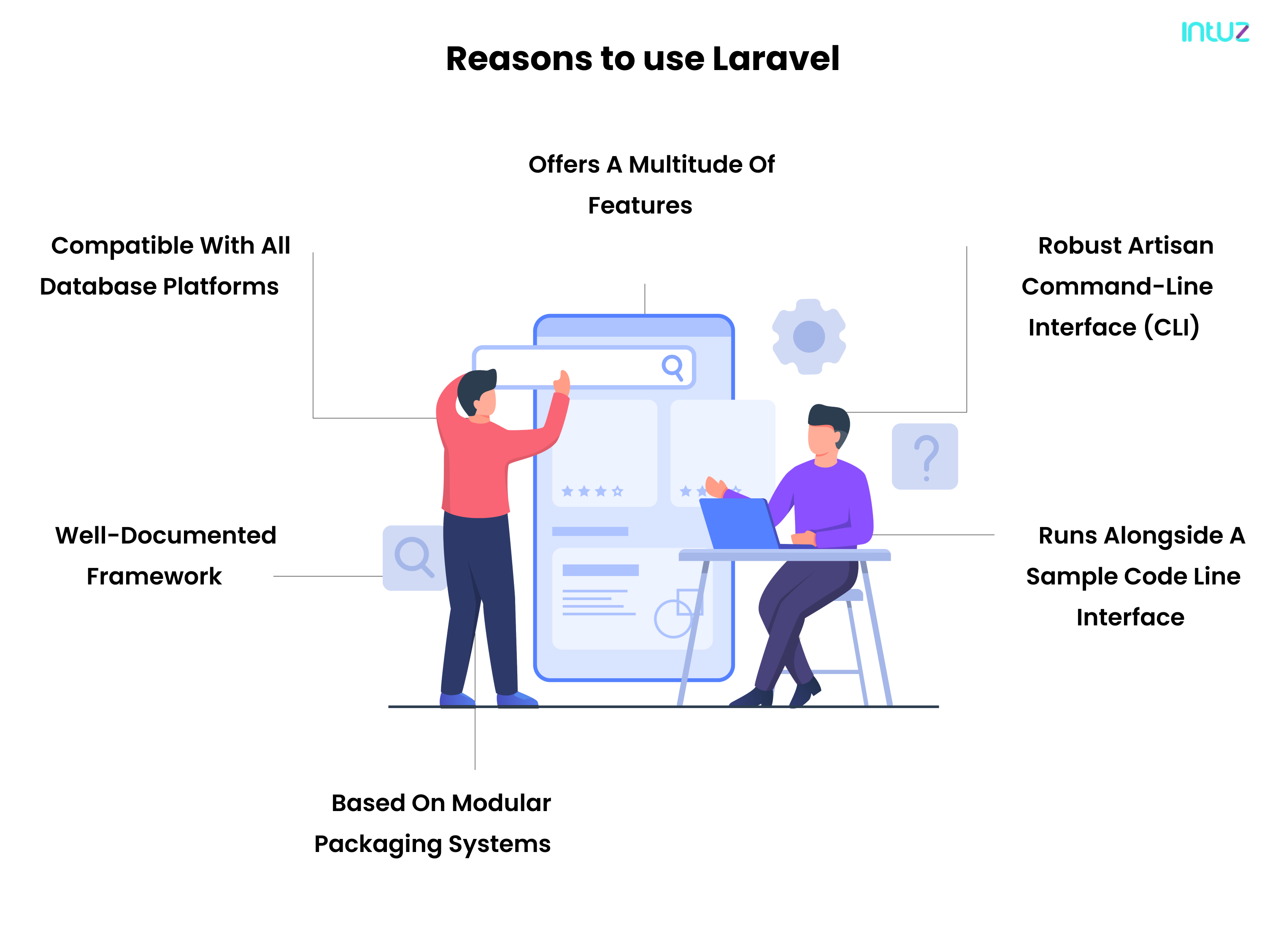 Use cases of Laravel 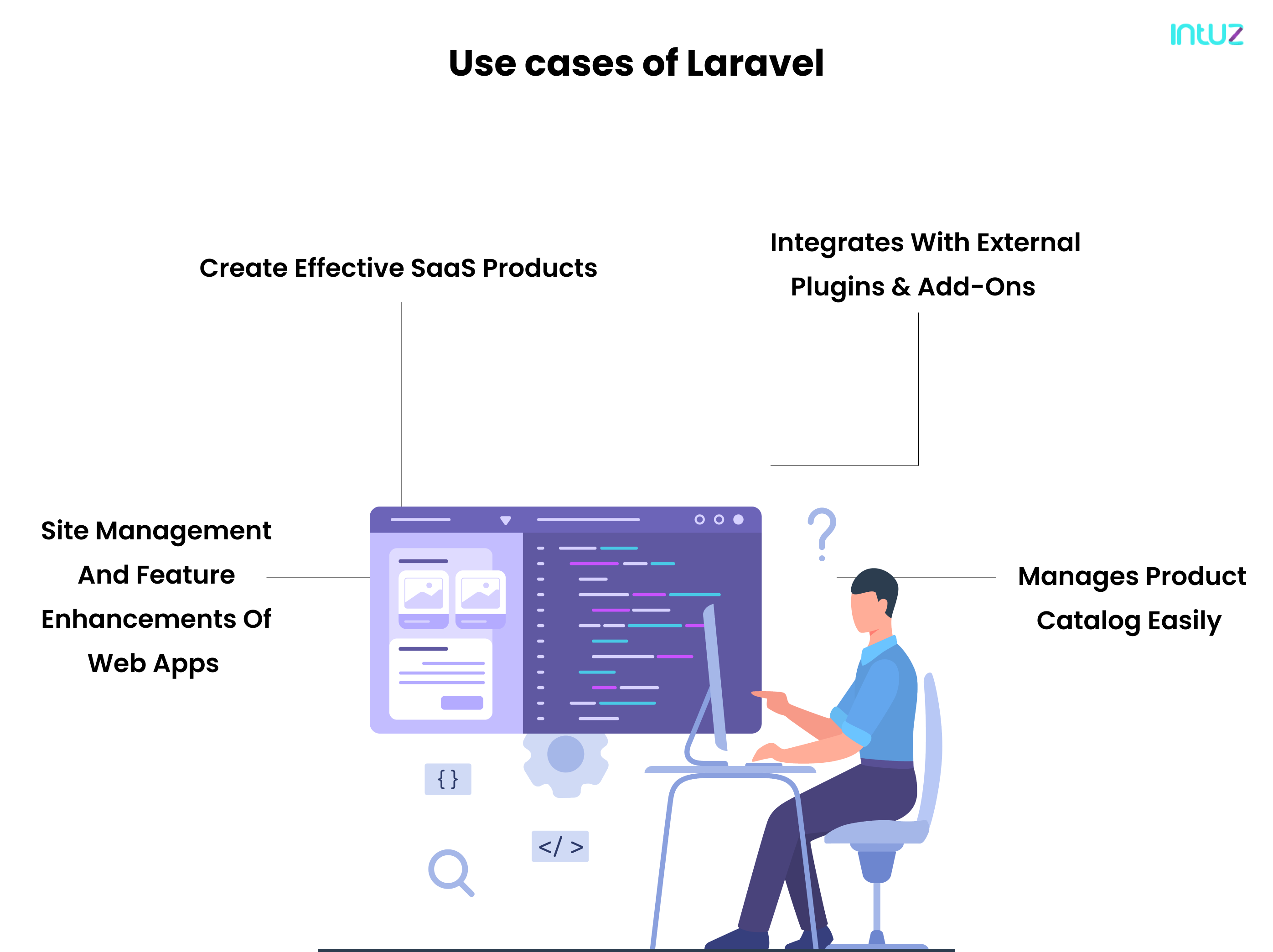 There is no doubt in our minds that developers can focus more on building web apps instead of wasting time in choosing between frameworks, tools, and implementations. Laravel has made developers more productive and efficient. No wonder a range of brands has already deployed the framework for enterprise web development  purposes, including: 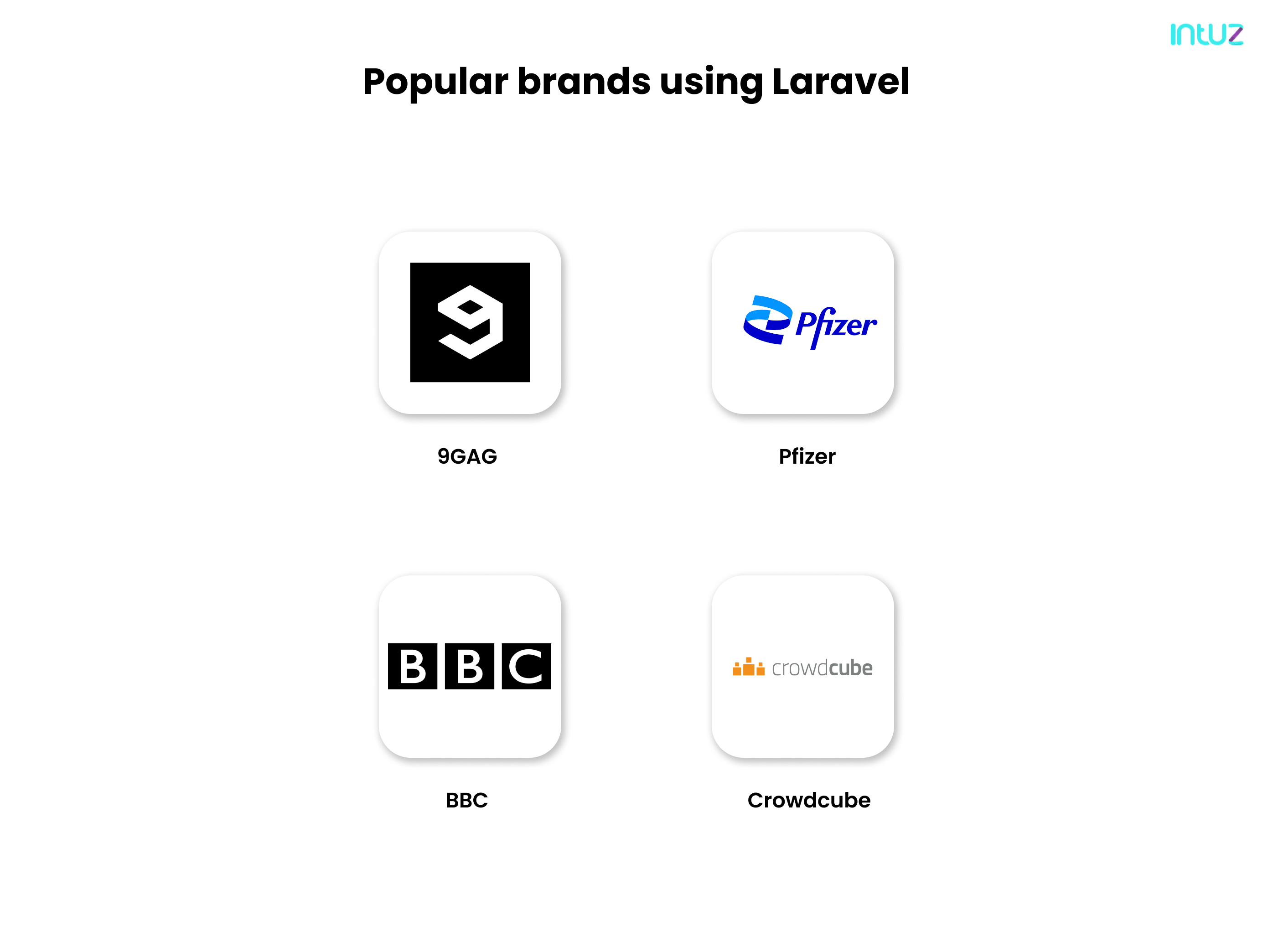 CodeIgniter is a simple PHP framework that is extremely lightweight — its download package weighs only 2 MB, including the documentation. Out of the MVC and MVVM architectures, it follows MVC to keep the PHP, app design, and the database code run parallel to one another, thereby delivering complete liberty for the consumers. The framework is a simple and rich toolkit helpful in developing full-fledged and dynamic web applications. In addition, CodeIgniter supports third-party plugins that facilitate the application of complex features in the website app.

It has excellent data encryption security procedures and is often considered the best framework available in the market for churning out dynamic websites utilizing PHP.

It comes with built-in modules, which help create solid and reusable components that, in turn, make the entire web development process fast and easy.

Use cases of CodeIgniter 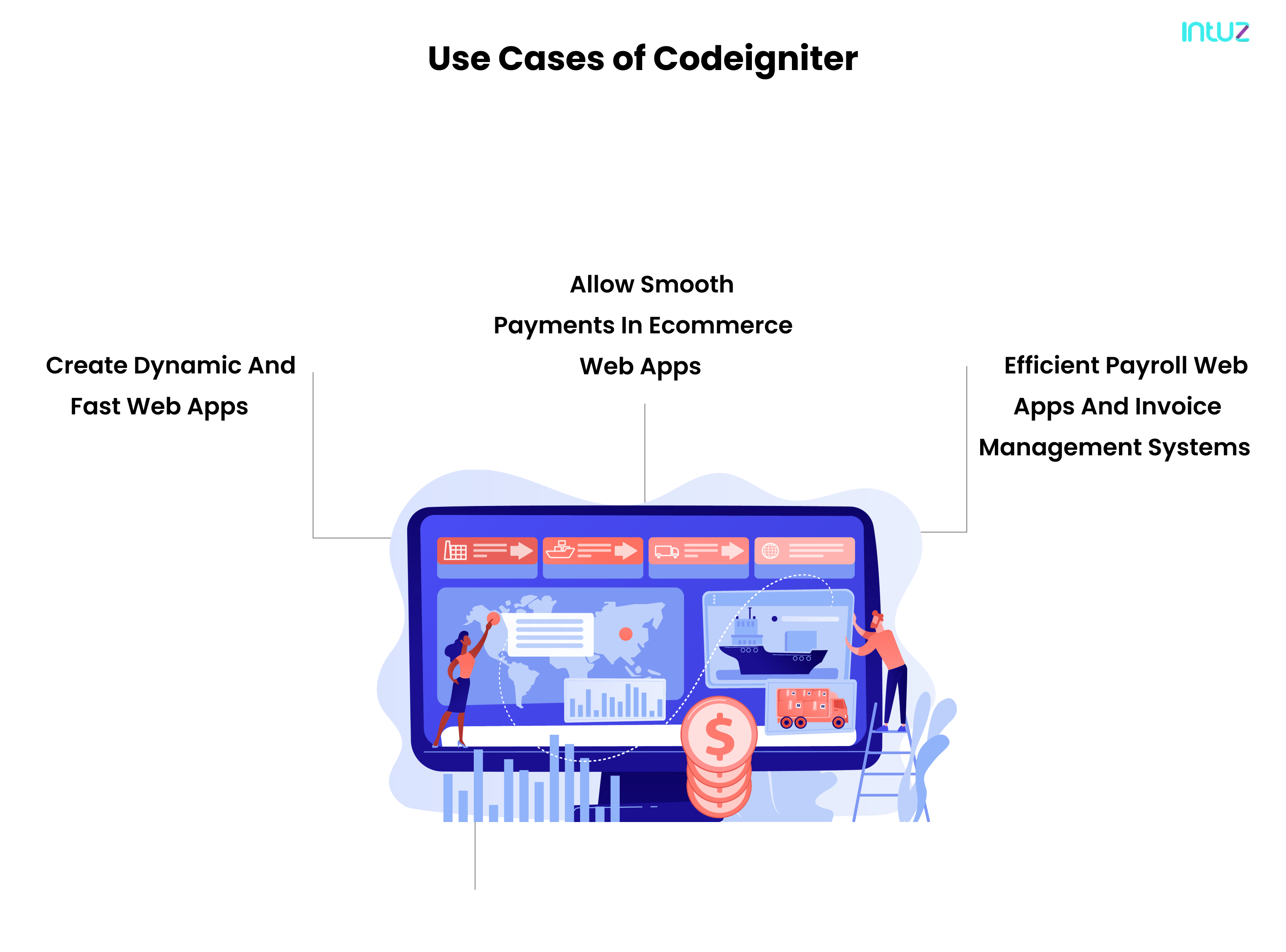 As of today, the framework covers 0.21%  of the market share and is responsible for building close to 50,000 websites worldwide. CodeIgniter offers more organized and structured documentation and lets businesses migrate data seamlessly from one server to another. That is why the framework is so popular among a range of business from different industries: 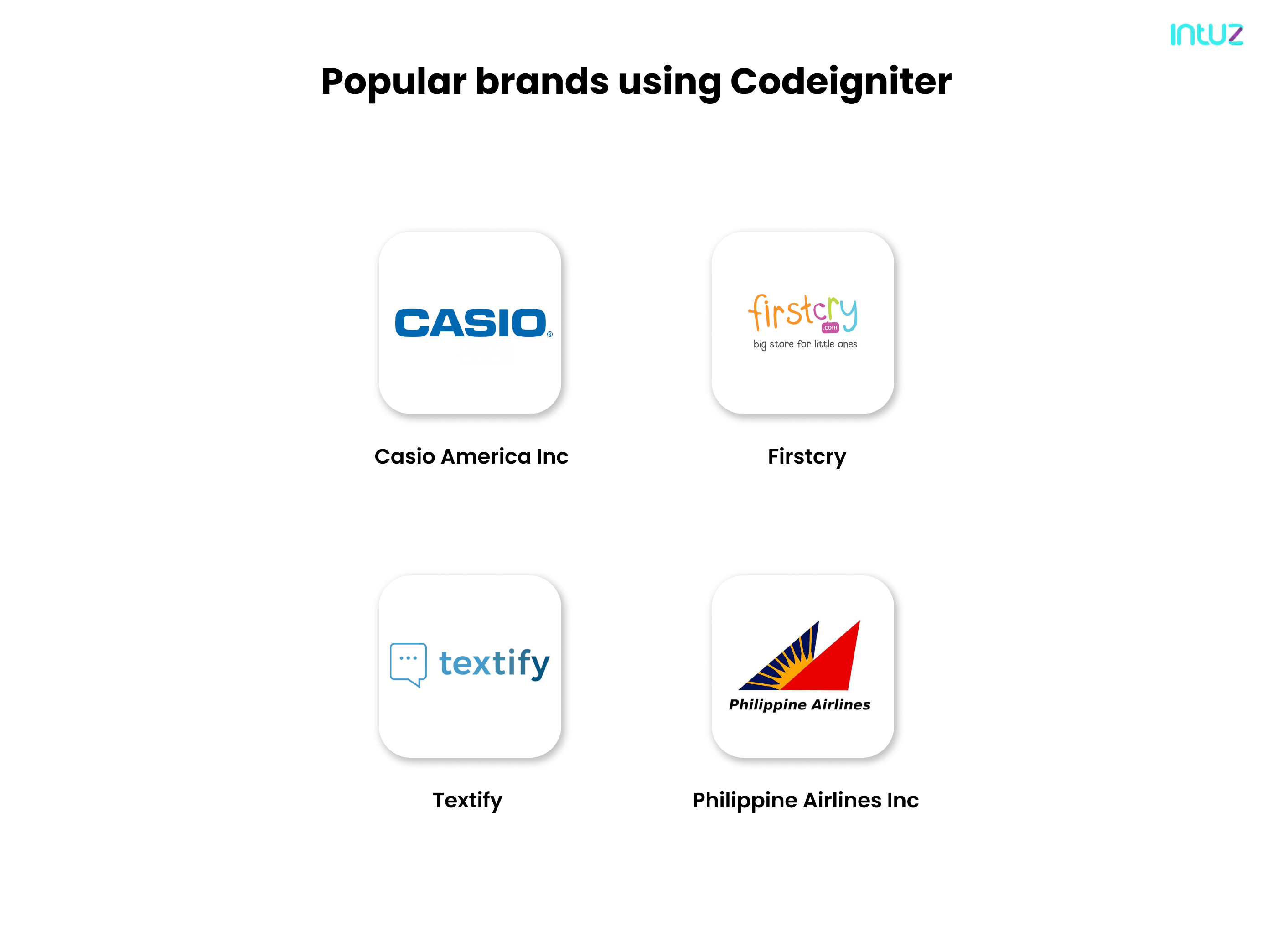 Factors to consider before choosing between Laravel and Codeigniter

It is common practice to use an MVC software development framework during a PHP development process. Of course, CodeIgniter is easy to learn, set up, and work on. Its simplicity has made it a hot favorite among beginners who have just started working on CodeIgniter projects. However, as time passed, there was a need for a PHP MVC framework that was more flexible, scalable, and performed optimally. That is the reason why many developers now use the Laravel frameworks for their web development projects.

In the following section, we will learn nine points of comparison between Laravel and CodeIgniter: 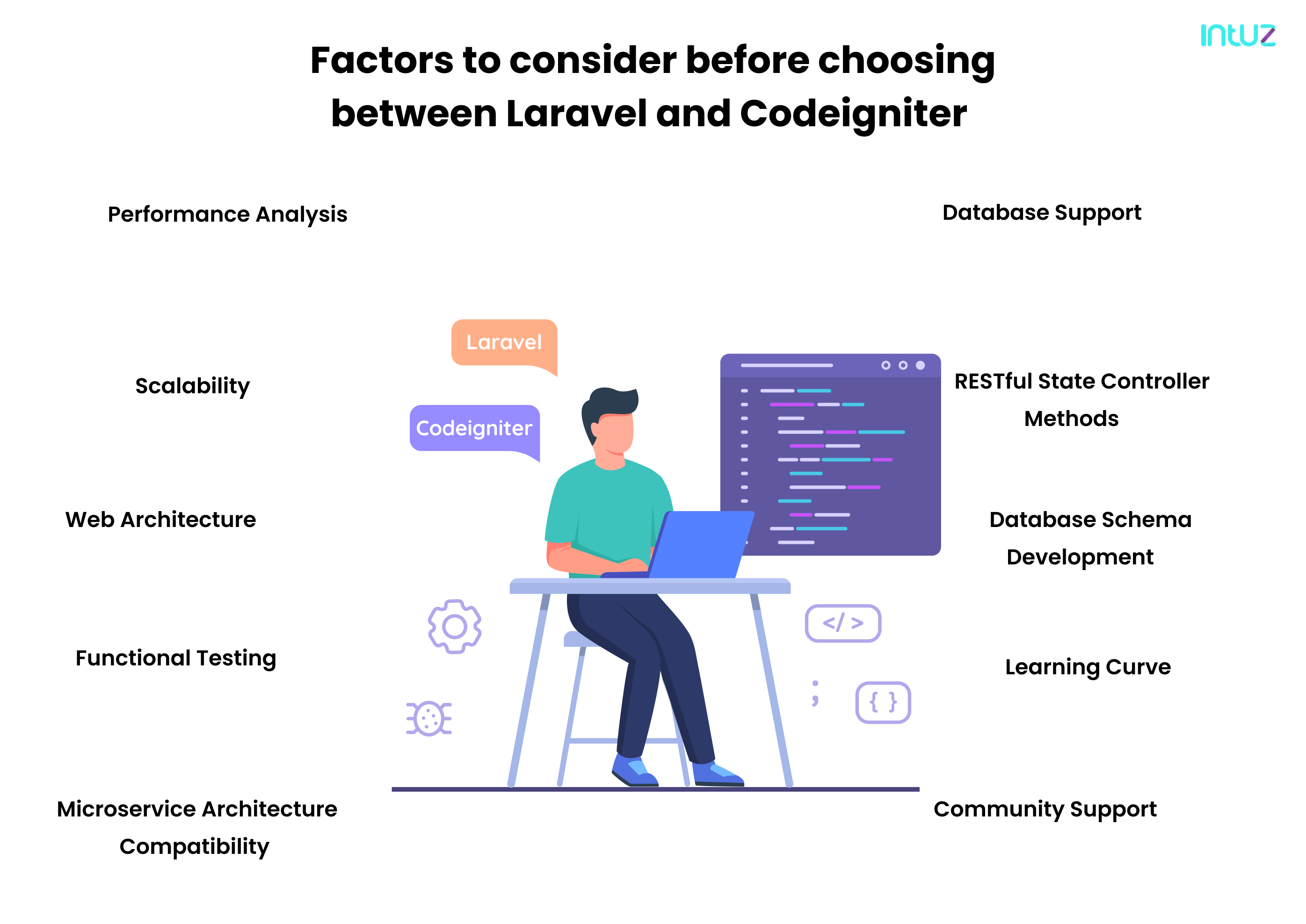 Since Laravel is comparatively slow, it affects the whole performance of websites and web app applications. However, the speed issue can be rectified by optimizing some aspects of the platform, such as the size of images and videos. Moreover, Cache tags enable pre-stored data to load quickly, resulting in improved application performance and response time.

On the other hand, every website or web app based on CodeIgniter goes through a functional test to determine its optimal performance. Here, the response time varies according to the number of users using the particular platform.

As mentioned previously, many popular brands have based their websites or web apps on Laravel. They can enjoy the flexibility to scale their applications without any boundaries. Having PHP as a base offers rapid growth for such business platforms if they have a robust database and load balancer — when they use Laravel. Being an extremely lightweight framework, CodeIgniter builds highly scalable applications that can be expanded by caching modifications — without interrupting the app performance. However, the business must take care of essential parts such as the database layer and CodeIgniter best practices

Both the web application frameworks have the same type of architecture. Laravel has an MVC architecture that enables developers to each pick up dedicated tasks for efficiently achieving the goals during the development process. In addition, the framework also provides complete control regarding maintaining applications and customizing their appearance to the visitors in the hands of the developers.

Like Laravel, CodeIgniter also utilizes the Model-View-Controller architecture to include scripting and testing modules in the web pages. Having this approach saves a lot of time and manual effort increases their productivity and helps the platform integrate smoothly with various Javascript frameworks.

Laravel comes with robust testing documentation by default, and it is tailored to meet the requirements of different types of applications to be tested at several levels. The testing occurs on two different levels — Unit tests and Feature tests — both of which make the process easy and robust. CodeIgniter comes with the unit-testing class through which developers write tests for their web development projects. It does not run a powerful test but instead evaluates all of the codes for quality for accurate results.

Divided modularly into different parts, Laravel supports the microservices architecture by enabling every individual part to perform a dedicated responsibility. These parts, in turn, communicate with one another with the help of language-agnostic APIs and ensure the application functions smoothly. On the other hand, CodeIgniter uses full-stack tools for building and running microservices. It also streamlines the codebase and develops infrastructure for handling and integrating data for maximum application scalability, performance, and support.

Laravel only offers first-party support to the following four databases: SQLite 3.8.8+, MySQL 5.7+, SQL Server 2017+, and PostgreSQL 9.6+. They interact with Laravel-based applications through specific drivers such as fluent query builder, raw SQL, and Eloquent ORM. The end-users are thus guaranteed little-to-zero incompatibility issues in the application. On the other hand, CodeIgniter offers a fully-featured and fast database class that can be used with both traditional structures and Query Builders.

A REST or REstful API is an Application Program Interface that adheres to the REST architectural style, allowing end-users to have a better interaction with RESTful web services. Laravel comes with RESTful Controller methods that allow developers to release a complete set of REST APIs without putting in any additional time or effort. However, CodeIgniter cannot be used for streamlining the development of REST APIs.

Laravel has a unique trait. It ensures database-agnostic migrations. It offers support for developing and manipulating tables across all the database systems, which further helps in migrations with modified tables and columns. Alternatively, CodeIgniter does not facilitate any precise features that make it easy for developers to simplify the schema migration process. The migrations are disabled by default and are only used to build and maintain databases programmatically. Plus, migrations in CodeIgniter are written in PHP.

As mentioned previously, Laravel can be a complicated framework for amateur developers to work on as it features various advanced functionalities majorly understood by only experienced professionals. Unlike Laravel, CodeIgniter is extremely simple for newbies. Its detailed and simple-to-follow documentation is the reason behind its shallow learning curve.

Laravel has a large and an experienced global community. Everyone is pretty active there, and all queries get resolved quickly. The maximum time that developers take is three days. Its robust community also shares valuable stuff such as podcasts, industry news, and library repositories.

On the other hand, CodeIgniter has a comparatively smaller community that actively resolves issues (whenever they arise) and exchanges ideas and documents regarding the framework.

Laravel vs. CodeIgniter: A comparative analysis 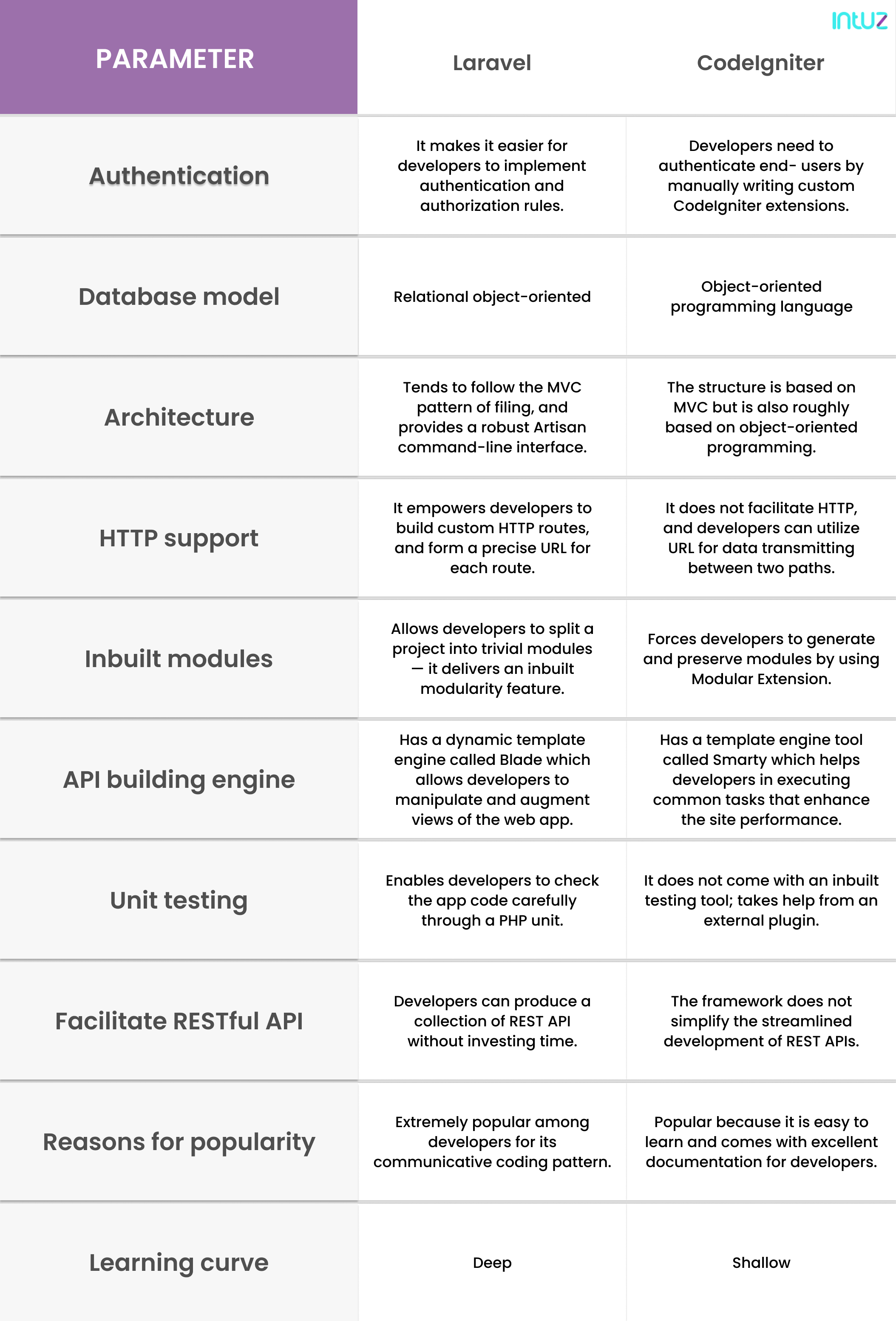 Both of the aforementioned PHP web frameworks are used massively by developers for building websites and web apps. There is no surprise that Laravel has more functionalities to offer with its refined documentation, expert talent tool, and robust database support. However, CodeIgniter is not far behind.

The framework allows powerful testing and better scalable options for web applications. Therefore, it is concluded that choosing either Laravel or CodeIgniter ultimately depends on the type of website platform a business wants to build and maintain.

If you are confused about which one is ideal for your web app development project, do not hesitate. Hire our web developers for they will be more than happy to help you. Book your free consultation call with us today!