Why Is Mobile App Development So Expensive?

Shelling out several thousands of dollars, for instance, $30 to $50K, to develop a mobile app may not be much of a problem for a large company, but when it is a start-up with limited capital, that much money can end up being a drain.

Given that there are 8.93 million mobile apps out there, it may seem surprising that developing one is so expensive. However, the scarcity of skilled developers and the complexity of building a robust, high-functioning app serve to rack up the hourly developer rates.

Moreover, there are specific benchmarks for app development project costs that range pretty widely. For instance, it would take $40,000 to $60,000 to develop a small app. But a complex, enterprise-level app would conveniently come with a price tag of $120,000+.

Most companies also forget to consider the app maintenance costs that can cost them nearly 20% of their actual app building expenses.

Even if you are an established business looking to develop a niche app, you may find that the costs are several times higher than you initially estimated. Here is a quick guide to why this happens and how you can avoid overspending on your app development: 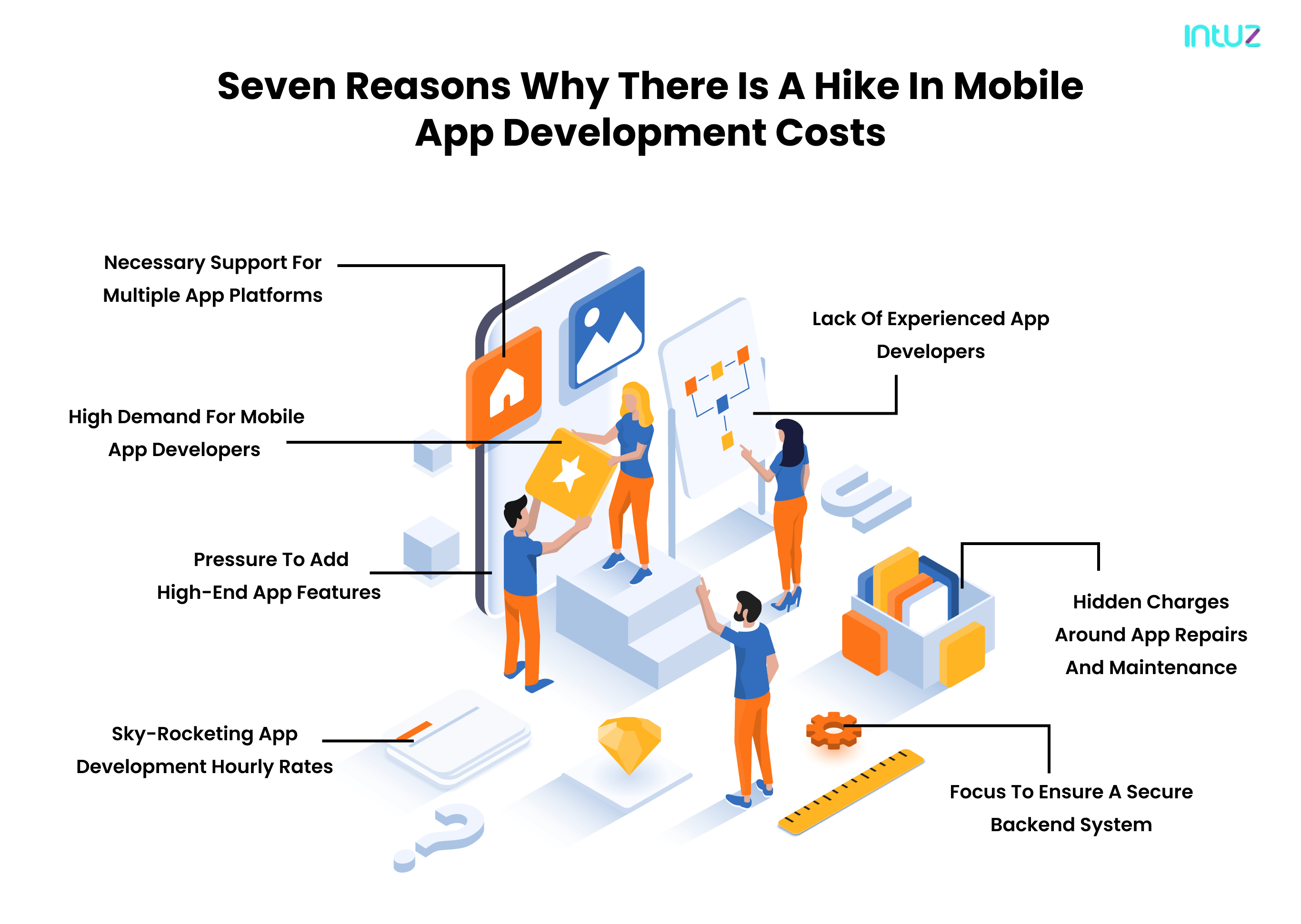 The number of smartphone users globally is 3.6 billion, out of which US consumers spent 88% of their time on apps. It is apparent companies would want to have access to their target audience's screens.

However, the mobile usage market share comprises Android, iOS, and Microsoft users. That means mobile apps cannot just be designed 'for iOS’ or one cannot only opt for 'Android app development.’

With 87% of smartphone users keeping their devices by their side throughout the day, building a mobile app is a requisite for companies that want to be seen and remembered.

The app boom has even given rise to new concepts, such as mobile-first design, on-demand models, and launching with just an app to build traction.

Small wonder, then, that the demand for app development services providers who can create top-notch apps is exceptionally high, driving up the fees that these developers charge.

Depending on what category your mobile app falls into, there are several features that consumers will expect as the bare minimum.

Push notifications, social media integration, email, payment gateways, and so on all require subscriptions to delivery services that could cost several hundred dollars a month.

Plus, if you sell products or offer subscriptions through your app, for instance, Google Play Store will charge a certain percentage as a transaction fee — something you need to factor into your costs as well.

Most companies do not develop their apps in-house. They outsource the task to an app development company or a team of developers who are paid for the service. The app cost could then boil down to the developer team's hourly rate multiplied by the number of hours the project takes.

This hourly rate can vary greatly depending on where the developer is based. North America, for instance, has a much higher hourly rate than Europe. App developers in India and the Middle East charge considerably less as compared to their western counterparts. 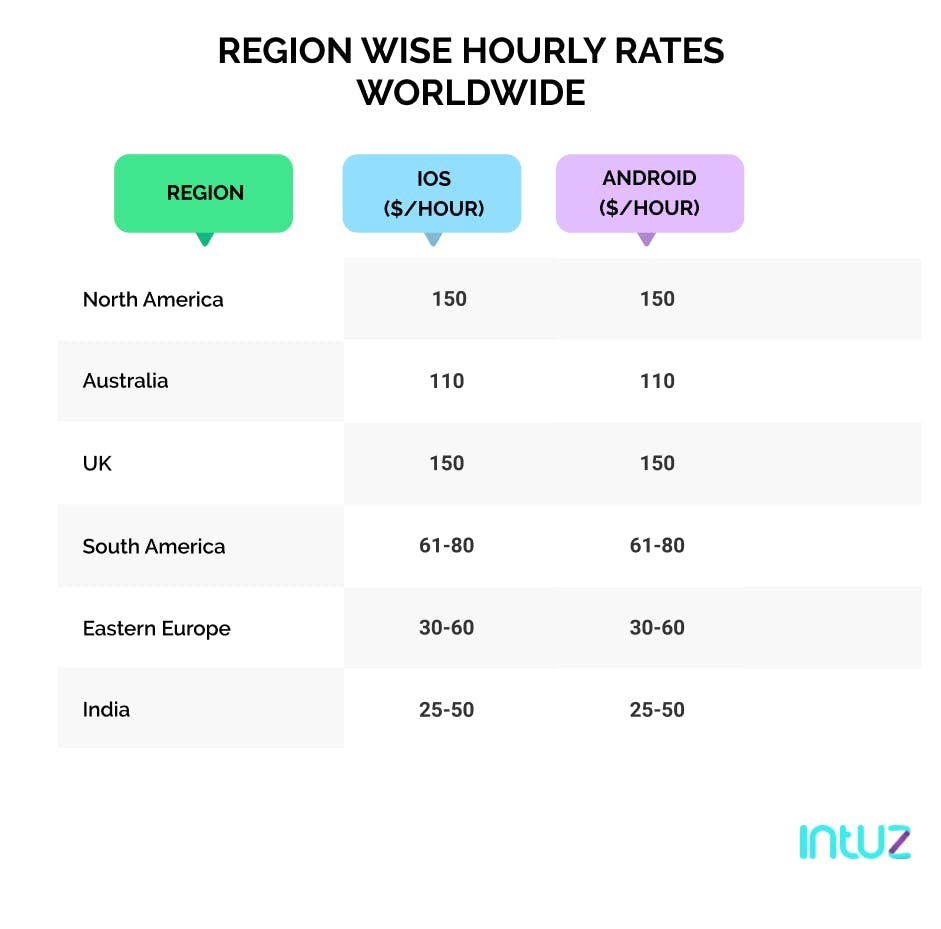 On the graph above, India has the lowest rate, with $25 to $30 per hour. On the other hand, US developers charge approx. $150 an hour. Concerning time, the more features an app contains and the more platforms it needs to be compatible with, the longer it takes. In other words, costs quickly add up.

Data storage, security, hosting, and a robust app infrastructure are crucial to making an app work safely and reliably.

Based on these factors, an app hosting server would cost between $70 and $320 a month. Most companies also outsource their app hosting to big organizations such as Amazon AWS, Google Cloud, or Microsoft Azure, which comes with their costs.

While basic app development skills can be picked up without trouble, not every developer has the ability or the will to constantly learn, adapt and pick up the skills needed to design commercial app solutions or offer enterprise app development services.

On the other hand, companies that want to make a mark will naturally gravitate towards experienced developers rather than amateurs. As a result, the few top developers on the market tend to come with a hefty price tag — increasing the cost to build an application.

Quite often, companies that get their app developed through a low-cost service provider end up withdrawing it owing to glitches or faulty features. The repairing process is then typically outsourced to more skilled developers, who charge handsomely for the task.

By not paying extra to get the app right the first time, therefore, the company ends up paying more later on for repair work.

Even if the app does not need to be withdrawn, ongoing maintenance tasks such as hosting and monitoring require skilled developers to intervene and have high hourly rates.

In fact, maintaining a medium-sized enterprise app would require companies to shell out between $5000 and $11000 every month.

Factors to consider before planning your app development costs

Despite the negative connotations surrounding the app development costs, it is hard to give up the idea of building your mobile app when you know it has the potential to propel your business to greater heights. To minimize the cost to build an app you first need to lay down the groundwork: 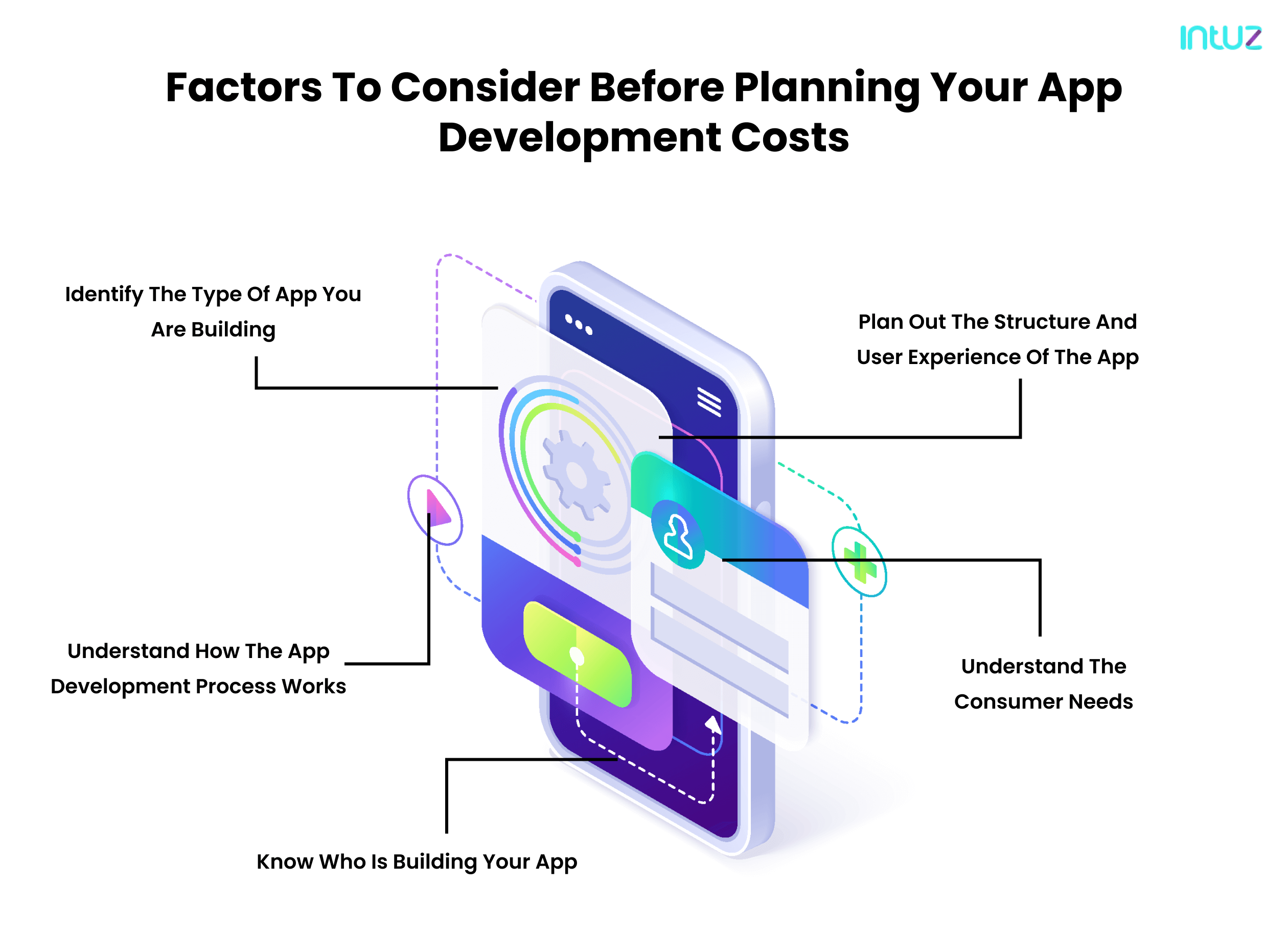 The first step to chalking out your mobile app development plan is understanding what the average consumer needs and how your app can best provide that. Do users want to use your app to communicate with friends? Do they want a gamified process?

Do they want to buy products or services within the app? This will help you identify the key features you need to provide and pick the developer team that can build you those features at an optimum cost.

2. Identify the type of app you are building

There are different types of apps out there, some of which are cheaper to build than others. For instance, device or functionality apps such as stopwatches and calculators are easy to build and can be developed within $15,000.

However, more complex apps that require syncing with the Internet, processing payments, using GPS, and so on require more time to code and are also very expensive (at $60,000+). 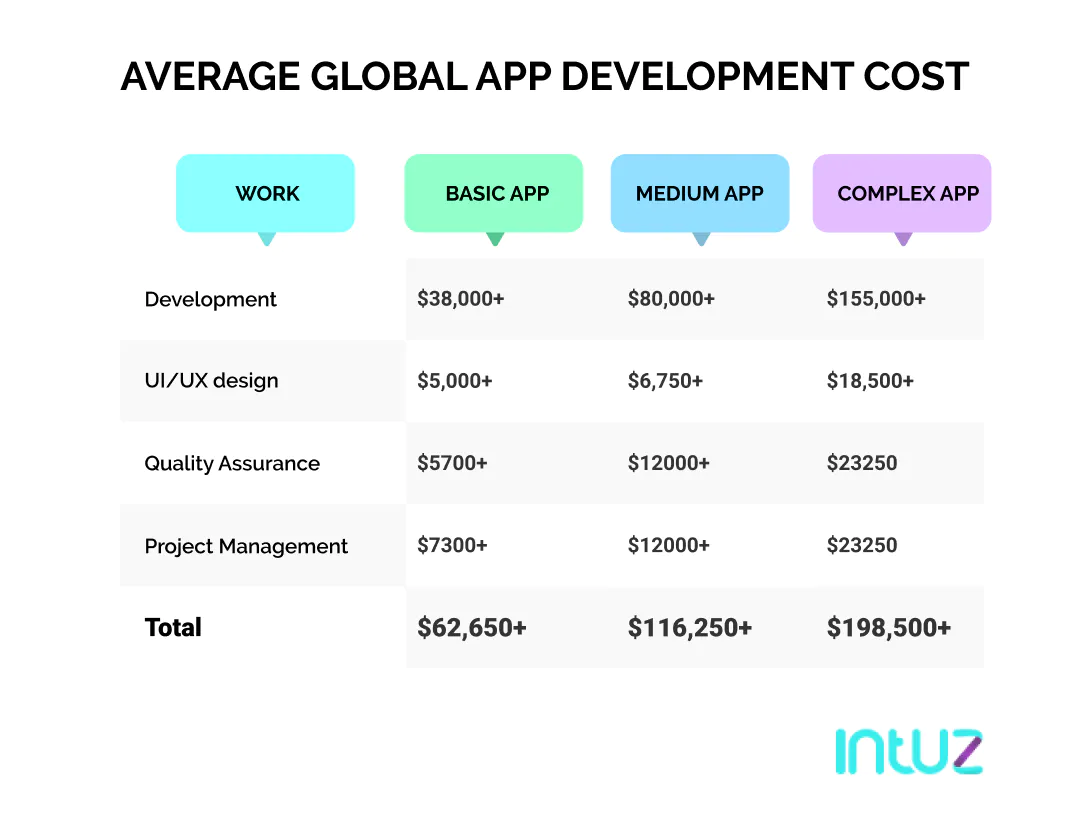 It would be best if you also considered backend development, design costs, architecture, security, and testing — all of which will cost more the more complex the app is.

To help with this, it is essential to have one clear category that your mobile app belongs to, such as music, gaming, navigation, fitness, travel, and so on. Then, keep only the features that are essential to this one category.

Depending on how complex your app is, you may need to hire up to several developers, and the more you have on board, the higher the costs are. The fees charged by developers depend on where they are based.

Asian countries, as mentioned previously, have lower hourly rates for developers than the United States. However, the risk with overseas developers is that you may need to overcome a language barrier — unless you hire a brilliant team of developers from that region.

You might also find it harder to keep tabs on whether they are on track with deadlines. In general, moreover, the longer it takes to develop an app, the more costly it gets.

4. Know who is building your app

On the other hand, firms have more expertise and will typically assign developers to handle your project exclusively, making it worth the higher price tag.

Of course, the larger and more reputed the firm is, the higher the charges, so choose the right option depending on your app development budget, the product's complexity, and how soon you need it up and running in the market.

5. Plan out the structure and user experience of the app

When you have a clear user journey map in your mind, you know exactly what features are needed at each point and avoid adding unnecessary ones.

Decide how you want the user to navigate through your app, keeping in mind the main product you are offering, and the typical buyer journey users are accustomed to competing apps.

Then, work with your development team to offer as clean and uncomplicated a user experience as possible. Remember, adding 'cool' features for the sake of it will only clutter the app, confuse your users and end up turning them off.

Building a world-class mobile app is not cheap and for a good reason. If you have significant budget constraints for app development, consider starting with a minimum viable product that offers the critical feature minus the bells and whistles.

You can also opt for a hybrid app that gets completed much faster and allows you to launch on iOS and Android simultaneously.

Above all, remember that it is not about the app but about the product or service you are offering through it. Even if your app is a simple one, you can be successful as long as your offering is the best in the market.

Looking for an app development company to build a mobile application for you — minus the unnecessary expenses and hassle? Contact us today!