React Native vs Ionic: Which is the Better Mobile App Framework?

Mobile apps have now become critical for almost any business to survive today. Gone are the days when a simple SEO optimized website would do the job in terms of an online presence. Mobile applications are the need of the hour.

In fact, most customers are warming up to mobile apps and use them to perform their daily activities more conveniently such as travelling to work, ordering food, reading, listening to music, productivity and more. Research shows that the total number of mobile app downloads stood at 107 billion in 2018, surged to 118 billion in 2019 and is expected to hit 285 billion by 2023. 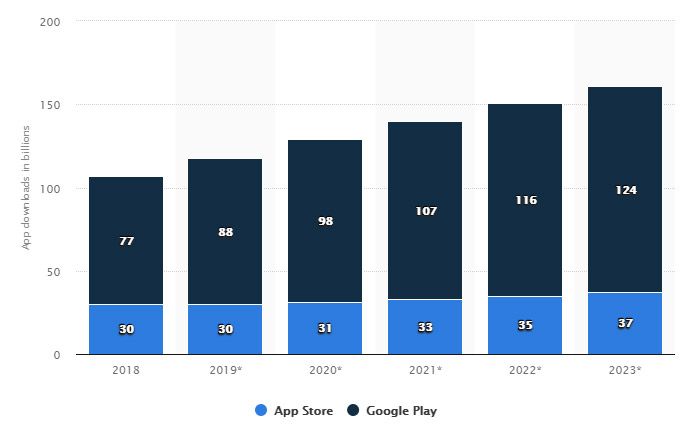 To deal with the ever changing consumer demand and their preference for mobile platforms, it has become essential to create a well-designed mobile app that caters to users across all kinds of devices.

With the rising popularity of mobile platforms, a lot of technologies and frameworks have evolved to make things simpler and smoother for customers. However, choosing the right technology to meet your objectives is essential for long-term success.

In this article, we discuss two of the most famous frameworks – Ionic and React Native.

On the other hand, a native app framework is one which is used for building native apps in a specific language for a specific platform. For example,

Now let’s take a look at the popular frameworks in detail.

Some of the features of the React Native framework are:

Ionic is a classic hybrid development framework that enables web developers to build apps on major platforms with a single and reusable codebase. One thing I really like about Ionic framework is that you can deploy HTML, CSS and JavaScript code as a mobile web app with relative ease, and mobile app development framework like Apache Cordova (earlier PhoneGap) bridges are used to access native features.

Some of the features of the Ionic framework are:

React Native Vs Ionic – A Comparison

There are several factors that set apart React Native from Ionic. Let’s explore each of them below.

In case of React Native, you get a seamless native experience since it adopts the native behaviour and functioning of the platforms. With the help of native UI components, you can get more out of the user experience.

Ionic, on the other hand, provides a complete SDK for building hybrid apps. Since it’s built with web technologies, it can help build multi-functional and multi-platform apps that require minimal coding.

Ionic is easy to learn, code and comes with pre-built and pre-styled components. It has clear and consistent documentation. Also Ionic comes with the support of lots of Native Components called Ionic Native.

React Native has simple documentation. There are lots of NPM (Node Package Manager) packages available to use as and when required. You can use the native component by creating a platform-specific wrapper.

I started my first project in Visual Studio Code as it comes with lots of functionality to create Ionic or Angular app very rapidly. In recent updates, we can directly debug in Visual studio code which is amazing.

I have created my first app using ATOM (React Native) which is also a powerful tool but what I feel is that it is comparatively slow.

Ionic is a framework based on Angular, a Javascript framework. I have created my apps using Angular 2. It uses HTML templates for its views. It’s in line with the Model-View-Controller pattern as views and logic are clearly separated. It uses SCCS for applying the style to the HTML elements.

Ionic performs clear and consistent when the developer uses most of its pre-built web components. It’s less dependent on device features.

Ionic is easier for testing during development. In fact, it provides instant feedback in the form of an instant preview of the app in the browser and mobile devices. We can check the things simultaneously on Android, iOS and on Windows phone in a browser.

At the time of development I faced an issue in Live Reload, it was demanding secure origins can make a call, security updates in the web view. You need to allow CORS- Cross-Origin Resource Sharing on your server.

In a React Native, you see the result of your modification as you make them. No need to recompile, rebuild, and complete app. The results can be seen immediately on an emulator or a real device. The developer can reload the app instantly with Hot Reload and Live Reload.

In addition to plugins availability on NPM for React Native can use plugins of Cordova and PhoneGap. Facebook is developing it, but we can create a wrapper of our native module and use it in the app. It has received the highest rating on Github.

To simplify it for you, we’ve summed up all the differences between React Native and Ionic in a table:

Now that we’re aware of the differences, let’s look at the individual strengths and weaknesses of each platform so that we can arrive at a conclusion.

Which One Should I Choose – React Native or Ionic?

Once you choose the right framework, the next step as a business owner is assembling the right team to work on your mobile app. At Intuz, we pride ourselves on being one of the top mobile app developers in the United States.  We bring a wealth of experience and learnings from over 1500+ app projects to the table.

Get in touch with us  and our solutions architect will give you a clear roadmap to get from idea to finished app.

So what’s your favourite framework between the two? Why do you prefer it?