Level Up Your DevOps Operations With CI/CD Processes

It bridges the traditional gaps between security and IT while ensuring swift and safe delivery of code. Silo thinking is replaced by increased communication and accountability amongst critical stakeholders during the development process.

The adoption of DevOps services increased significantly by 17% between 2017 and 2018, and this number is only predicted to rise in 2021, with an expected CAGR of 18.7% in 2023. High-performing organizations that follow this Agile development methodology enjoy:

When security is baked into all phases of the development lifecycle, it gives rise to a new terminology called DevSecOps. This was not possible before because the security tools did not fit seamlessly into the developer workflow and were only considered in the production stage.

However, this problem has reduced significantly ever since the security tools advanced and started offering a seamless service to the developers.

The CI/CD pipeline is a part of the broader DevOps services in AWS and the majority of cloud platforms. However, to successfully deploy and execute a CI/CD pipeline, organizations need access to continuous integration tools for preventing the bottlenecks that may occur during the integration and delivery of the product. 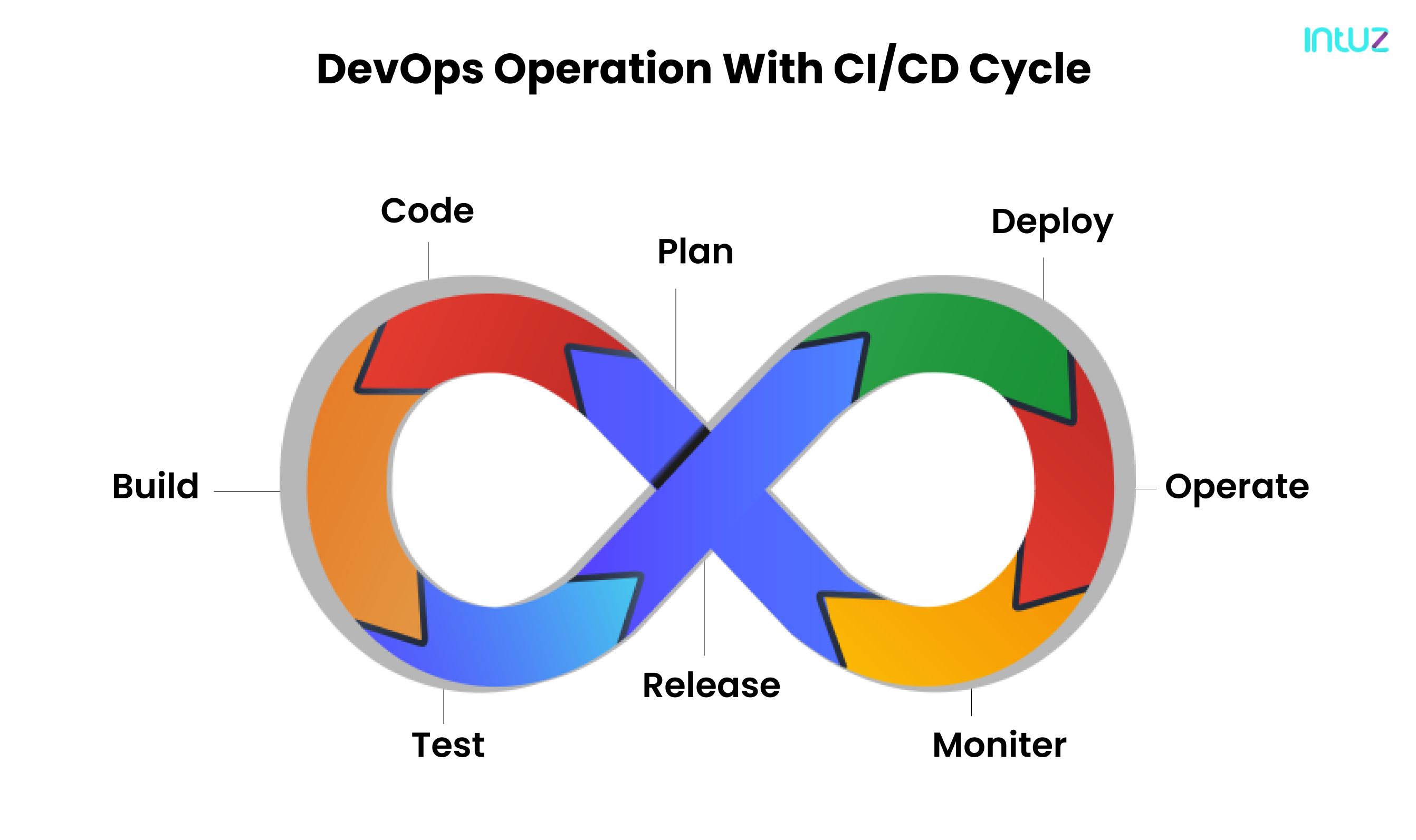 But before we dive deep into that, let us first go back to the basics and understand where the need for a CI/CD pipeline comes from and what these terms mean: 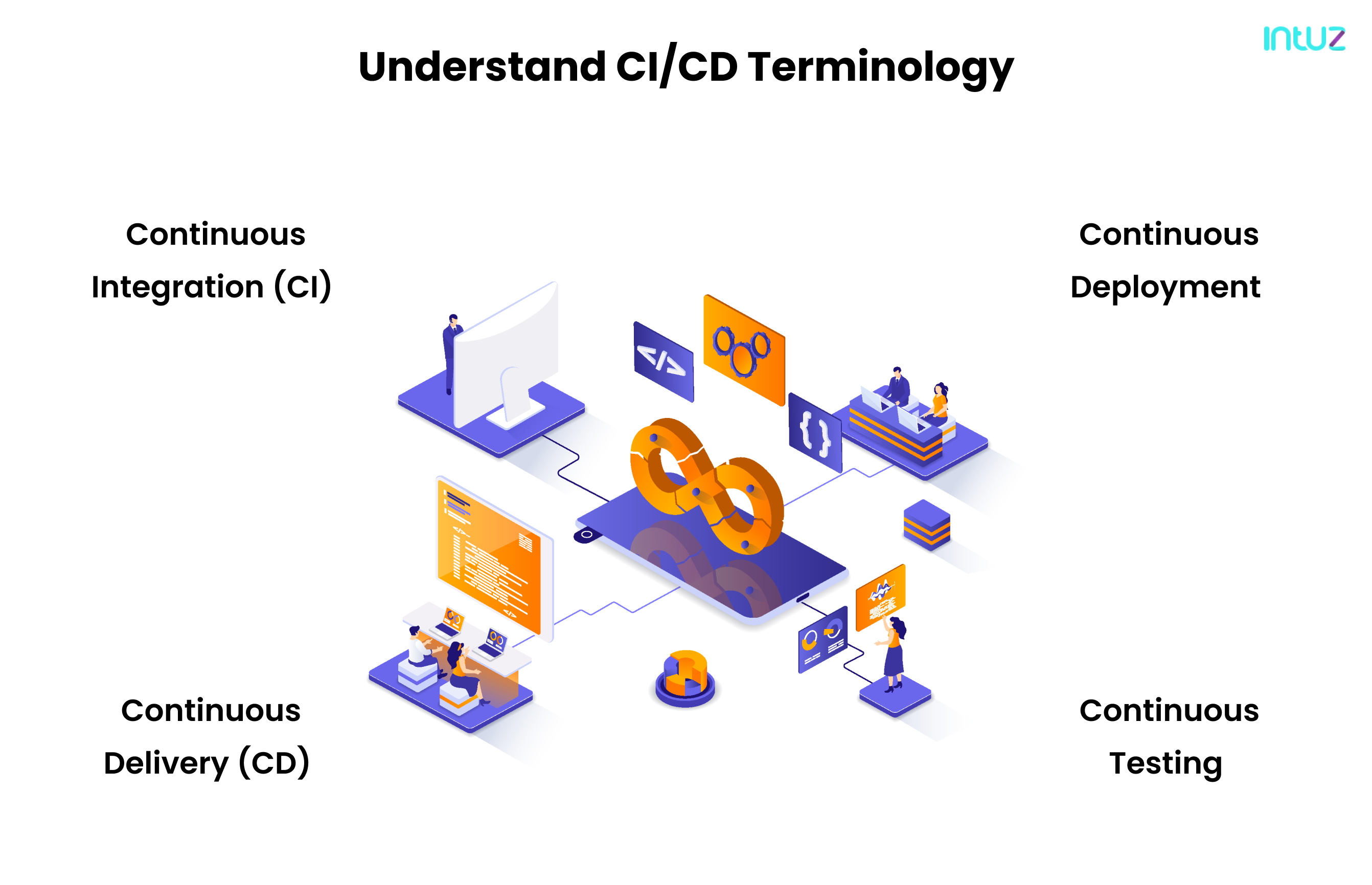 This is the first step in the CI/CD pipeline. When an application is built iteratively, developers frequently code, deploy features, and test it. 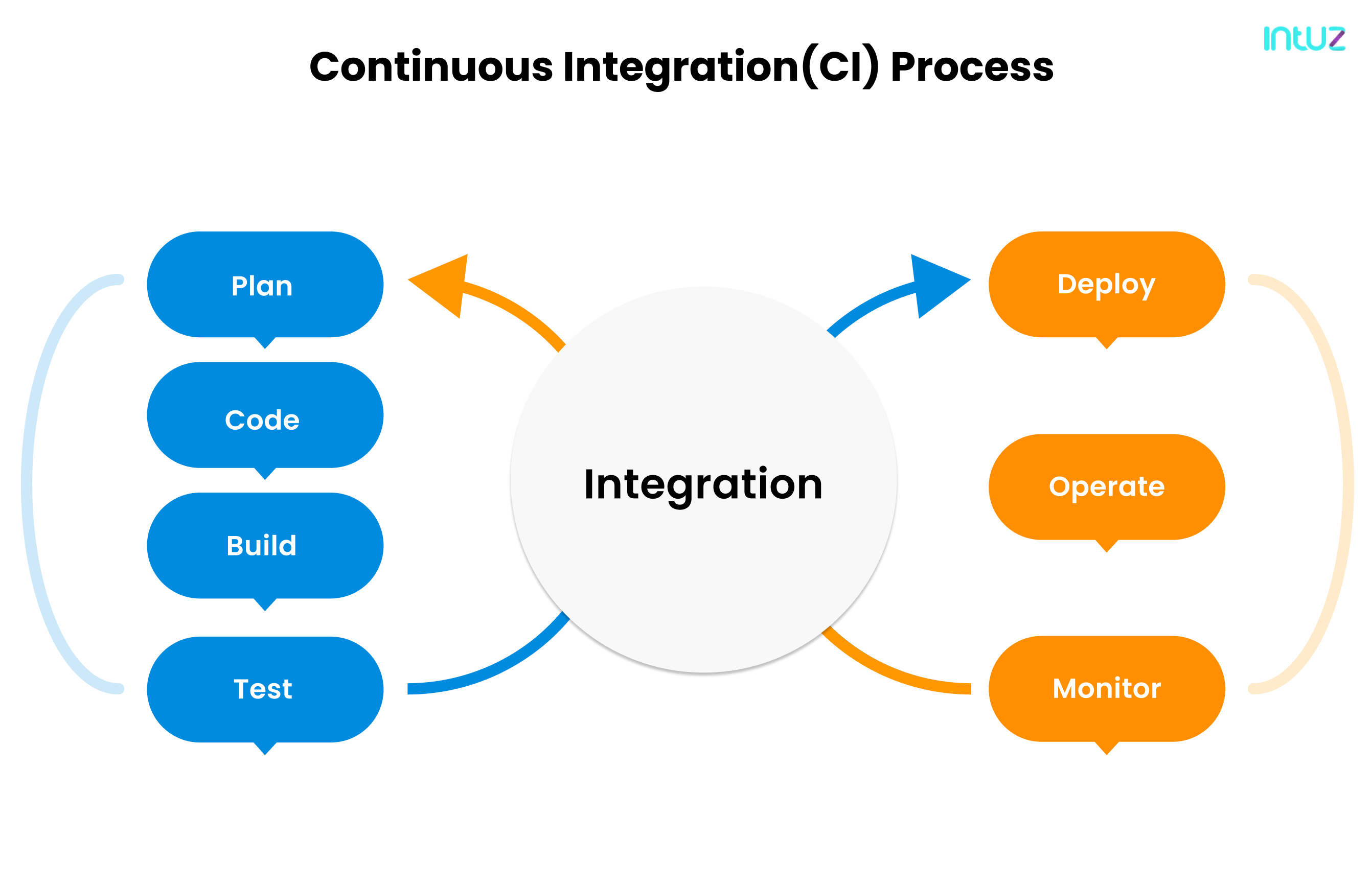 CI refers to the process of automating that workflow by setting up a script-based mechanism for automatically detecting a change in the shared code repository. Such changes can be detected through periodic monitoring, polling, or using a push-out mechanism such as webhooks.

As soon as the change is detected, the CI solution automatically pulls up the copy of the updated code, develops it, carries out unit testing, and performs dependency and compatibility checks for detecting loopholes at an early stage during development.

Simply put, CI expands the scope of automation testing. After the unit testing has been conducted at the integration level and debugged, the application becomes more robust. But the developers' job does not end here. 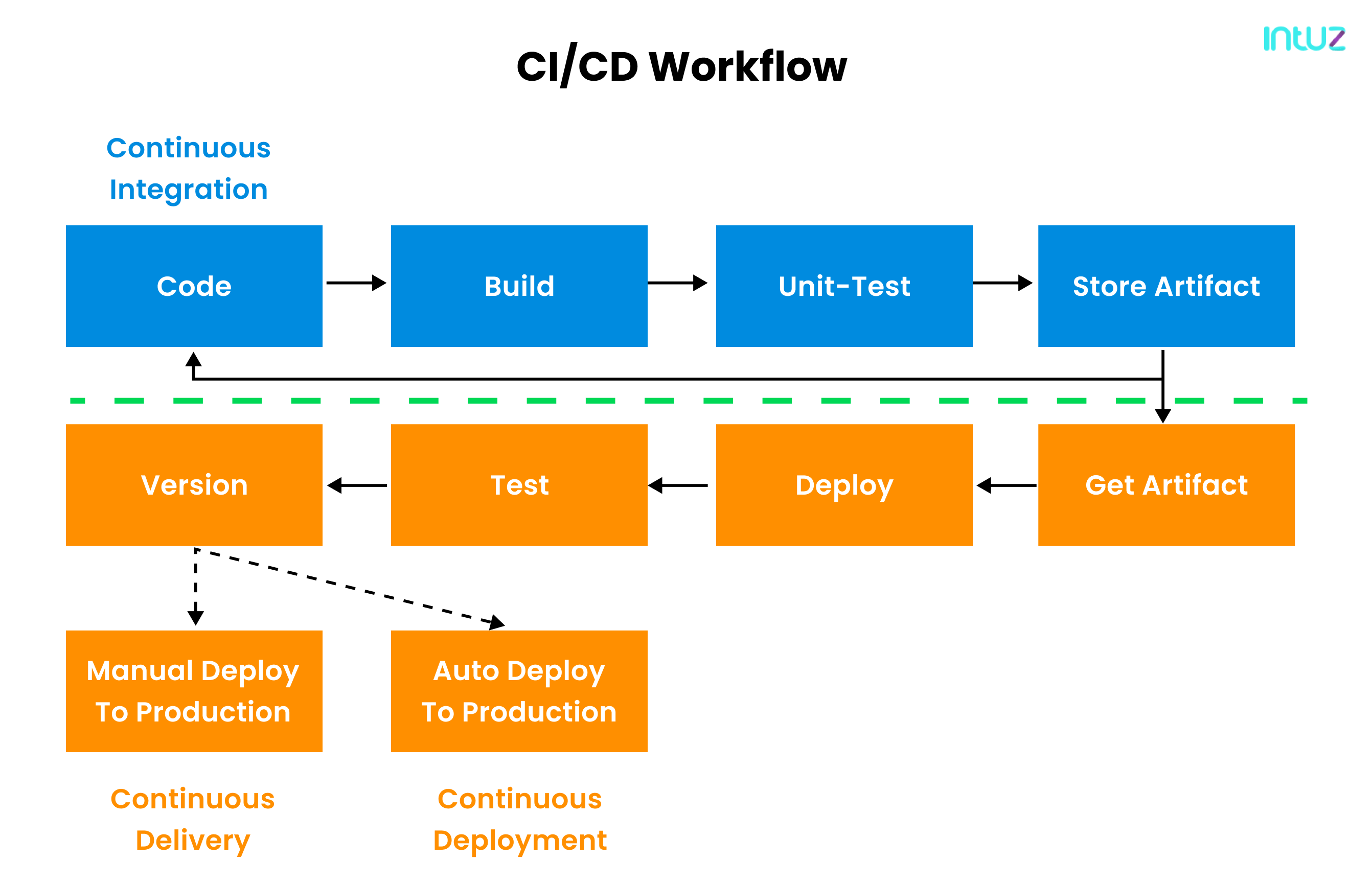 They also partake in API testing, integration testing, load testing, and so on. In CD, the entire software release cycle is automated for developing, testing, and staging code updates as soon the CI phase gets over.

Also short for CD, this is the final stage in the CI/CD pipeline process and is a test-driven approach for validating the application on various parameters and automatically rolling out deployments.

It is a strategy wherein any written code passing through the automated testing phase is unequivocally released into the production environment, making all changes visible to the application's users.

Plus, it also enables developers to incorporate continuous monitoring and alert features in this stage to transition back to previous application versions in case of any issues.

CT automates the application testing process and embeds it into the CI/CD pipeline for greater agility. For instance, unit testing is more appropriate for the Continuous Integration stage, whereas integration testing, acceptance testing, and functional testing fit better in the later stages of the pipeline.

It is a series of steps that automate the process of software delivery. It writes code, runs tests, and helps you deploy a new version of the software in a safe and secure environment.

In simple words, it introduces automation and continuous monitoring through the modern software development lifecycle — from continuous integration and delivery to deployment and testing.

Depending on the organizational hierarchies, multiple pipelines could be deployed in the development process. A CI/CD pipeline is triggered by an event — e.g., a pull request from a source code repository, a regular schedule to match a release cadence, or the presence of a new artifact in an artifact repository.

Many tools are used in the CI/CD pipeline, namely, Jenkins, GitLab, CodeShip, Nevercode, Bamboo, Buildbot, and so on. To ensure a faster software delivery, you must use tools such as: 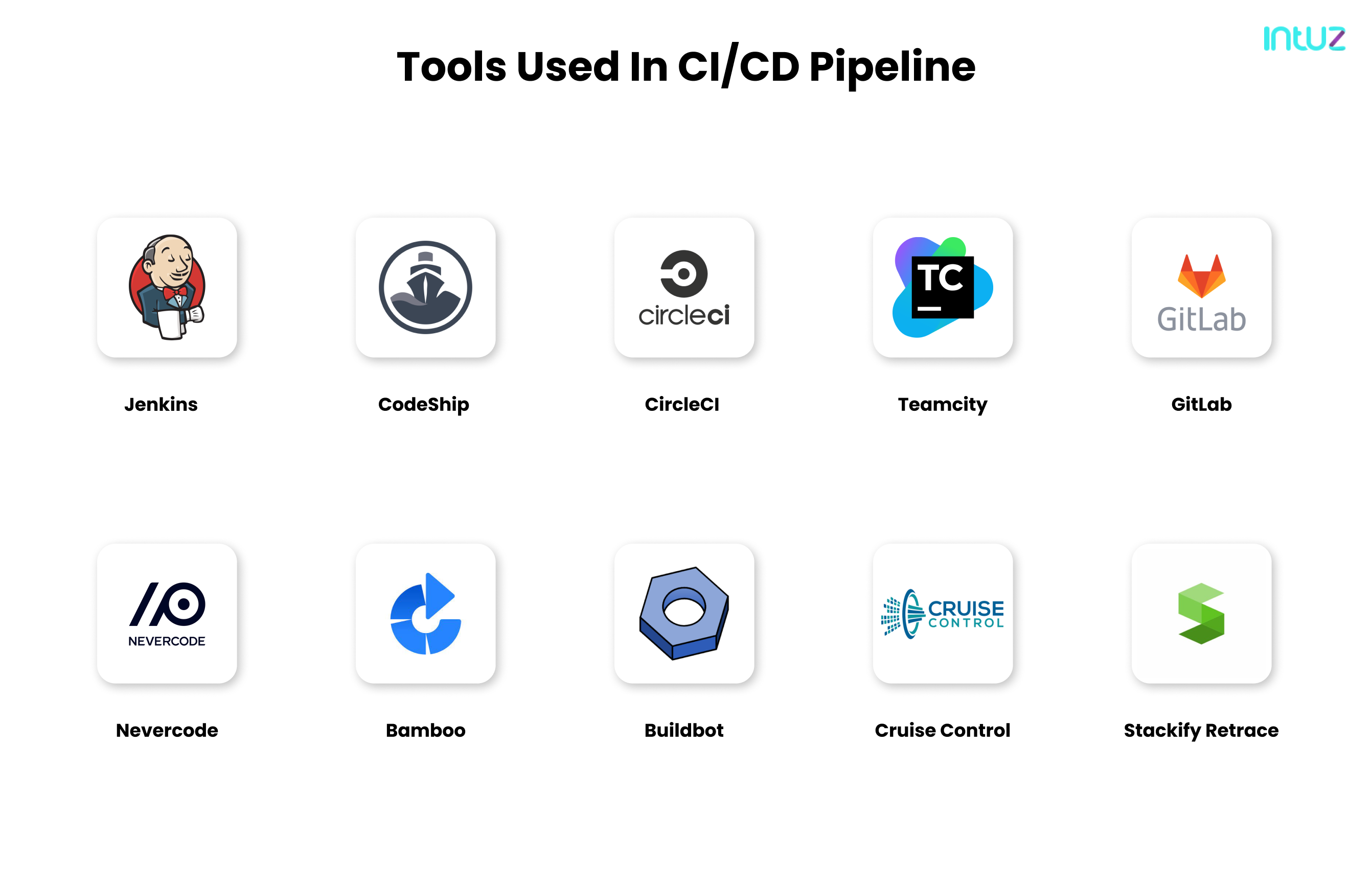 Characteristics of a good CI/CD pipeline 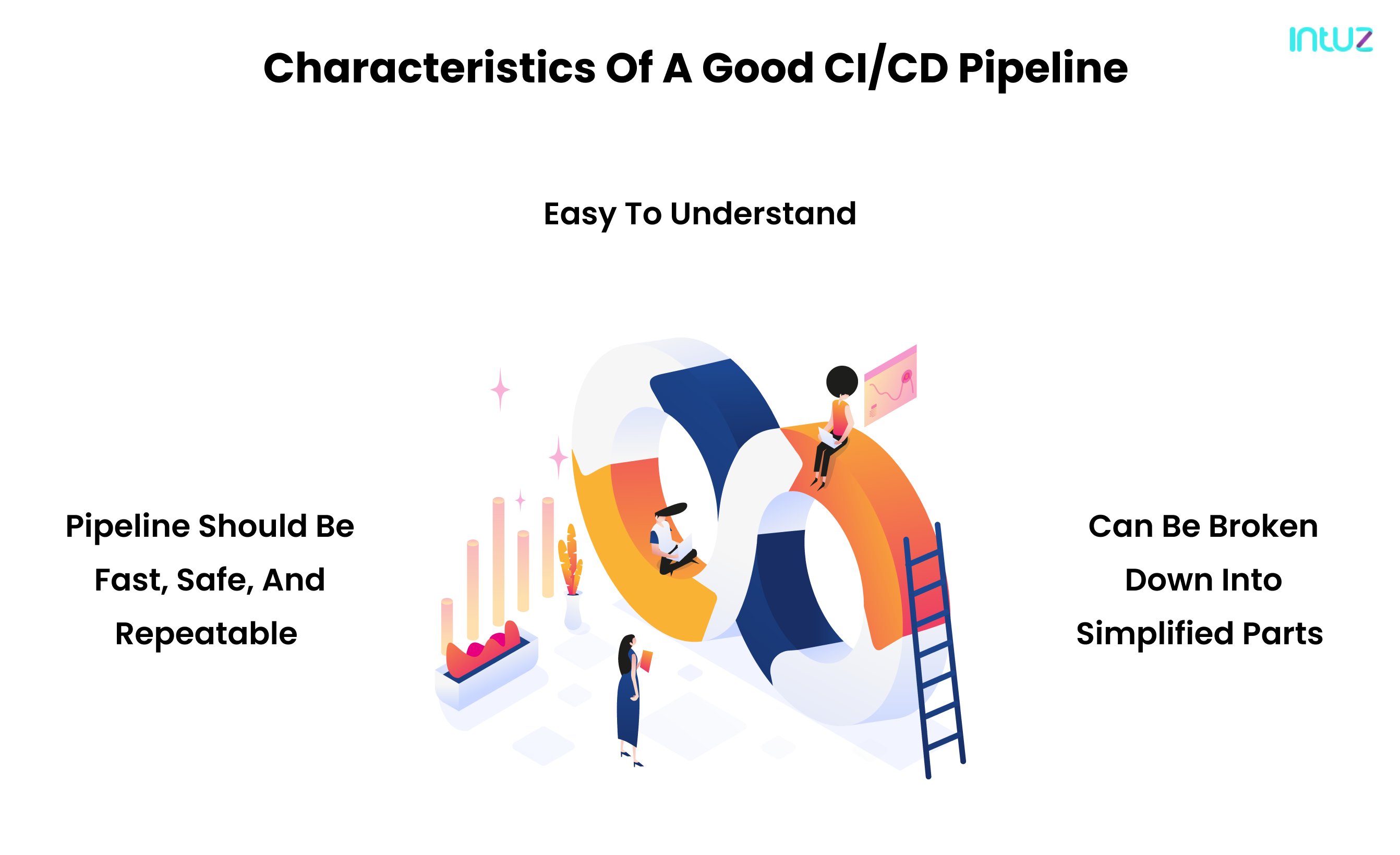 Research shows developers have experienced a lead time of less than an hour and a change failure rate below 15% for software deployments. That means an efficient pipeline will catch almost all anomalies and regressions before the code reaches the end-user.

This happens because of the transparent process pathway through which a single unit of production-ready software is delivered. There is no single canonical implementation of the pipeline — making it easier for developers to handle the process.

3. Good pipelines can be broken down into simplified parts.

Single service or specific software can handle every step in the CI/CD pipeline. Moreover, developers can split the tasks into several tools for faster execution and deployment of the product.

Benefits of following the CI/CD pipeline

CI/CD enables developers to integrate their codebase with a shared repository in small batches — through which they can share the builds across departments and avoid working on the application development in silos. Due to this, detecting and fixing bugs in the software becomes simple — that too at an early stage.

2. Reduces the change and review time

In the CI/CD pipeline, code changes happen at a granular level, which means the developers are fed back on the software application issues sooner rather than later. Moreover, such changes are easy to test compared to hefty ones, which could cost more money and time.

Since a CI environment can integrate with a Version Control System, any change triggers a CI run, which automatically verifies the coverage code and checks whether all the tests are passed.

3. Speeds up the release cycles

CI/CD serves a continued automated testing pipeline by merging the codes and deploying them in production-like systems. That way, they can keep the code in a release-ready state at all times, thereby enabling shorter release cycles.

The CI/CD pipeline helps developers detect the reason behind a fault and identify its exact location. On the other hand, fault isolation is the process of minimizing the negative results of an error by circling its cause and location. This level of monitoring makes the system easier to maintain, and developers can push out error-free apps into the market quickly.

Through the CI/CD pipeline, you can improve the reliability levels of your testing. Since the app codebase is monitored from the beginning — and at a granular level — it leaves little chance for errors to creep into the system. Moreover, developers can make the codebase more reliable by running the tests locally or just a snapshot of code on the local machine.

From a monetary and financial perspective, the potential impact that a deployment process can cause is significantly minimized by allowing developers to deploy the software during non-critical business hours.

Also, developers can catch errors early before there is any significant damage to the application. Such a pipeline increases code quality and gives the organization's ROI a much-needed boost.

Due to CI/CD, you have the chance of decreasing the number of non-critical defects in your development team's backlog. These defects are often fixed and can quickly become a critical issue if not rectified as soon as possible.

CI/CD helps developers focus on the big picture and sort out more minor issues quickly before the application hits the production level. It also keeps the end-users happy as they end up finding zero errors in the product.

The benefits of CI/CD are not limited to testing. Developers can follow this approach to work better with all departments as it encourages accountability and transparency throughout the development process.

For instance, CI throws light on build failures, architectural bottlenecks, and code integration problems. Constant supervision of these tasks allows the stakeholders to analyze and fix the issues at the earliest.

Adding to #8, CI/CD pipeline offers a common framework for all programmers, QAs, and project managers working on software application development. All the stakeholders are always on the same page when a change is being made to the codebase or in the case of a build failure.

If external help is needed, all the teams can rely on each other, correct the issue at hand, and move forward. This was a massive problem in the traditional development life cycles — not anymore!

Whatever you do, it will always be for the customer. Building an application also has the same end-goal. The CI/CD pipeline follows the customer-first business approach. Once the product is released, it supervises the initial reactions of the end-users and tracks the results.

The same is fed-back to the developers if the reaction is negative and potentially threatens the application's success. This results in usability improvements, which further optimize the development process.

Frequent bugs can harm the application's reputation. Since you will not stop releasing periodic intervals once you launch the product, you must keep a close eye on how well the app is faring at all times. Through the CI/CD pipeline, you can keep the product up-to-date and provide a high user satisfaction level.

Employee turnover for any company can be expensive. A promising CI/CD pipeline ensures software engineers get to work on the most important projects and not worry about time-consuming, repetitive, and tedious tasks. They can also work confidently, knowing that errors are caught automatically and not when the application has gone into production.

Any organization's ultimate aim to develop a software application is to reach its potential customers faster than ever. This is precisely what the CI/CD pipeline offers. It helps developers reduce risk in each build stage and support the product to reach the end-user faster.

But to avail all the benefits of a modern DevOps for software development, it is necessary to lay a strong foundation for this agile methodology. Here is how you can do that: 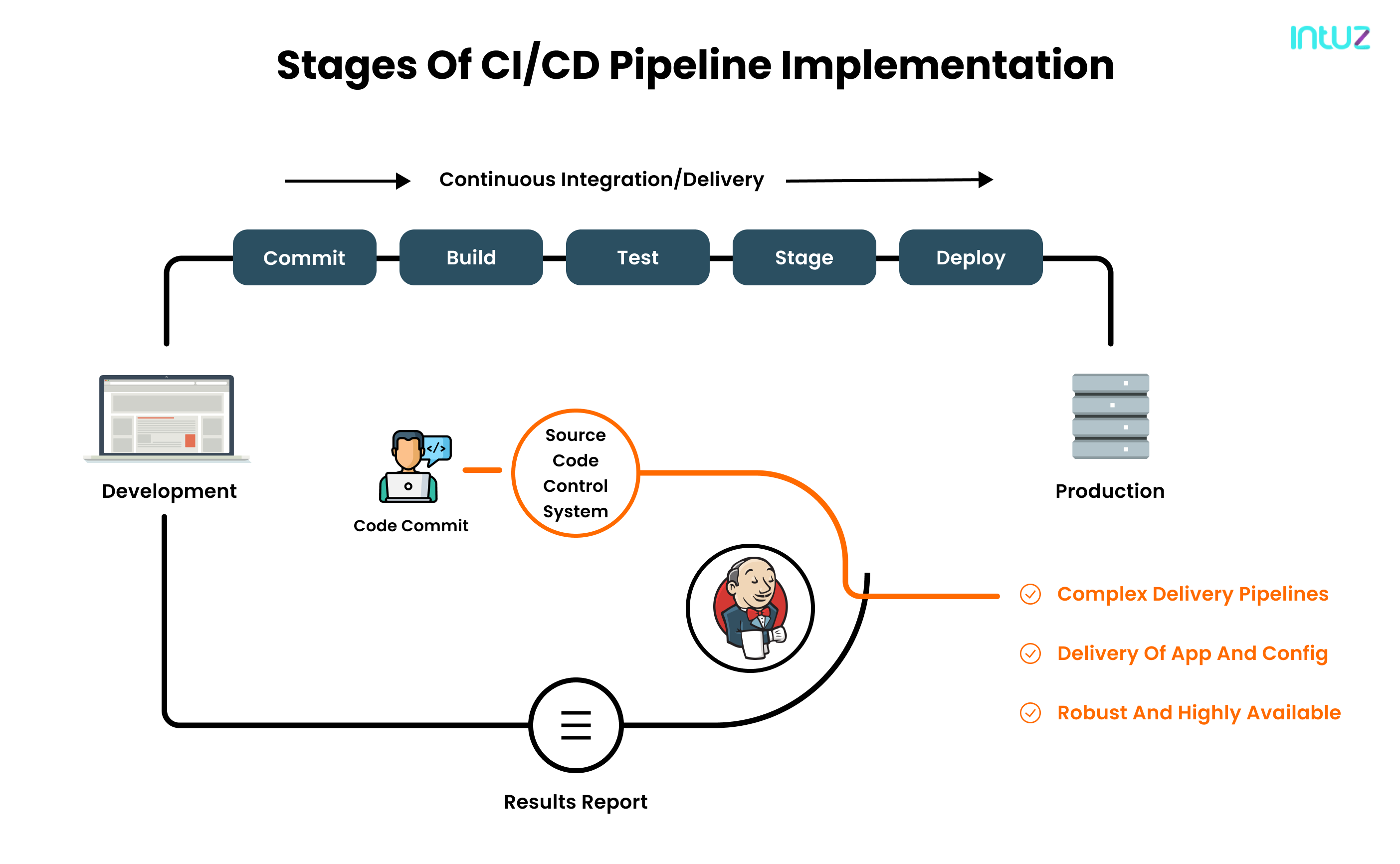 New functionalities integrated with the application codebase in this stage. The developers are constantly alerted on how the code is performing. Different CI/CD tools help them achieve a series of unit tests to ensure the product works fine at every stage. For instance, Jenkins provides various interfaces and tools to developers for automating the complete software cycle.

This is where the Alpha and Beta deployments of the software application take place. First, developers analyze the performance of the new builds and how they are interacting with each other. Then, they conduct a manual test that double-checks if the application is working correctly before it is pushed to production. This happens in cloud computing services.

This is the last stage of the CI/CD pipeline implementation process, and it is where the application goes live. Once the build has gone through all the test scenarios successfully, it is ready to be deployed to the production stage — for the end-users to play with.

Using an agile methodology such as DevOps is one of the best things you can do to ensure a speedy and efficient custom software development process. Create a CI/CD pipeline that suits your business requirements and gets the job done.

Make the most of every component in your DevOps process. From build to deployment, you must constantly assess how the application is coming along and adapt wherever possible.

If you are looking for a DevOps team that can build, test, and launch an application in the market swiftly and reliably, you have to talk to the experts at Intuz. They will help you realize your application quickly and provide you guidance every step of the way.

Kindly email them at getstarted@intuz.com or share your contact details for a callback. Speak to you soon!