MQTT vs. AMQP: IoT Protocols You Must Know About 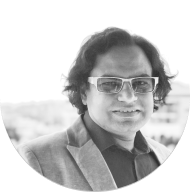 If you observe the emerging IoT space and usage patterns long enough, you will notice that IoT protocols, MQTT and AMQP, fulfill complementary roles in the greater systems contexts. From being extremely reliable and high performance to allowing multiple connections and ensuring security, both do a job well, but MQTT stands out. This article discusses the two protocols in-depth, including their differences, with a significant focus being on MQTT. Let us begin:

IoT protocols form an essential part of the IoT tech stack as they enable the hardware to exchange data meaningfully and in a structured manner.

When we think about IoT, we always think about communication. Interaction between devices, servers, gateways, sensors, and user apps is what IoT is all about. While the programming languages build the foundation of IoT apps, the protocols enable innovative communication.

Because of the protocols, the entire deployment process becomes economically profitable as, from the transmitted data pieces, helpful information can be extracted for the end-user rather easily.

Known for their modularity and scalability, both protocols have rich extensibility and annotation functionalities that initiate two devices or more to initiate links and data transfers.

If you observe the emerging IoT space and usage patterns long enough, you will notice that the two protocols fulfill complementary roles in the greater systems. Of course, some overlap areas, but MQTT and AMQP also lock horns in many aspects.

In this article, we will discuss the two protocols in-depth and understand their differences, with a significant focus being on MQTT. Let us begin:

What is the MQTT protocol?

MQTT is a publish-subscribe network protocol that transports messages between devices using limited network bandwidth and a small code footprint. Run over TCP/IP, this lightweight protocol is used in many 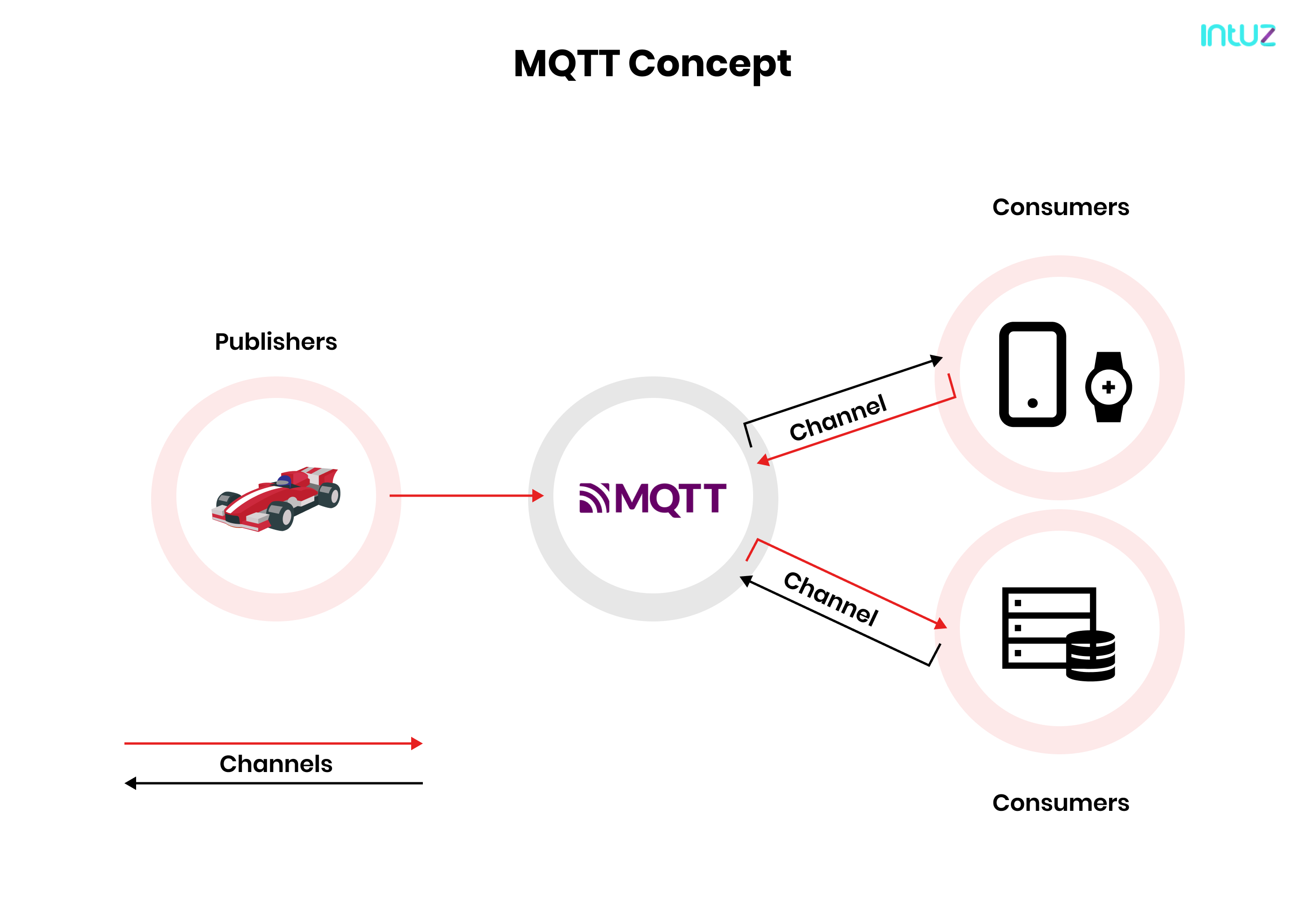 industries, including manufacturing, automotive, and oil and gas.

In 1999, IBM and Eurotech developers designed MQTT version 1.0. This ensures an easy exchange within a network of devices. In 2014, client-server communication came under OASIS, a public forum for developing open code and standards.

Under their tutelage, MQTT version 3.1.1 was released. In 2016, ISO assigned it ISO/IEC 20922:2016. The functioning of MQTT is simple — it uses a publish-subscribe pattern, including the following components:

Why MQTT protocol is used in IoT

The reasons are many; the most common being: 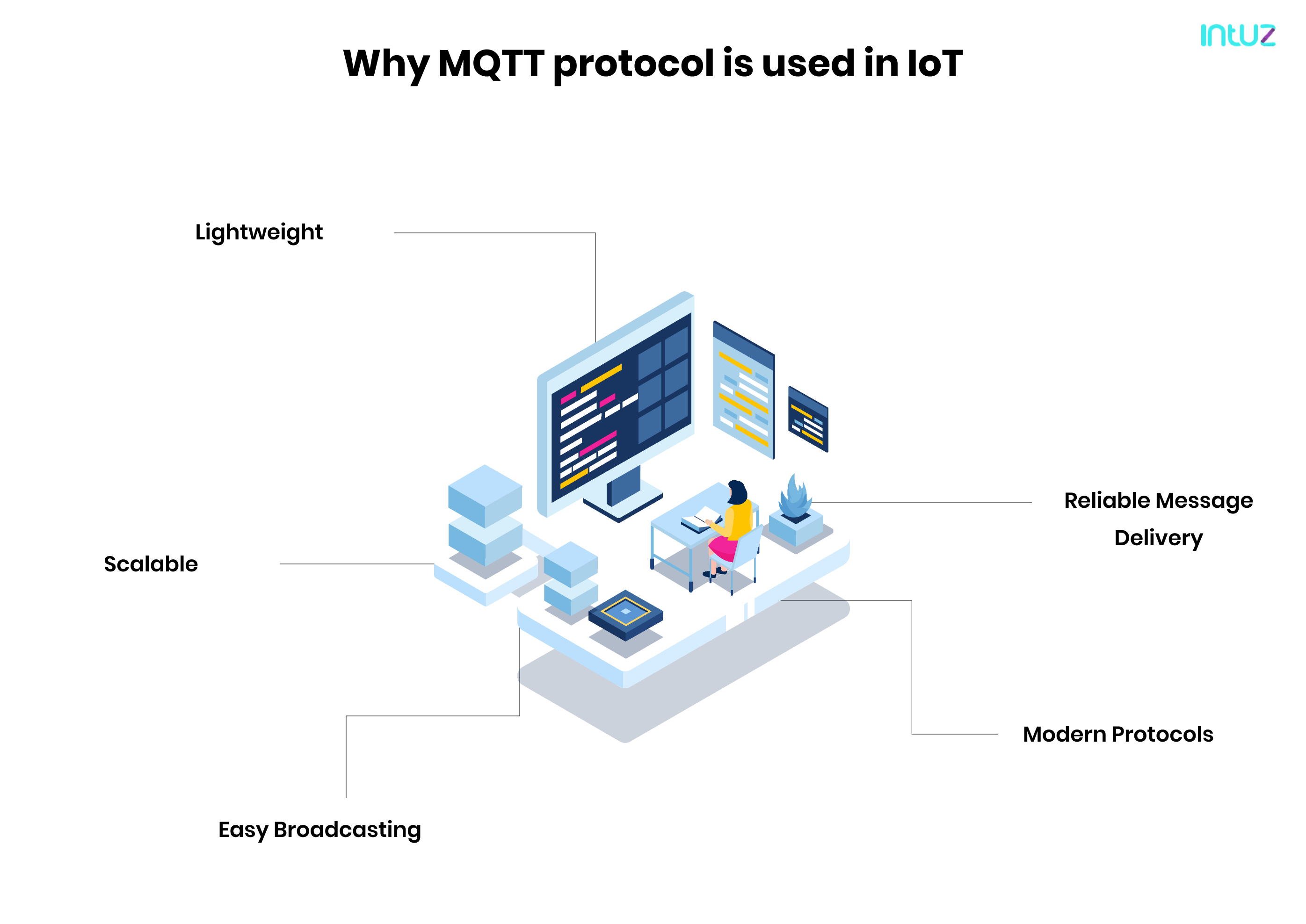 If you plan to deploy the protocol in your IoT app, you must ensure the transmitted data is secure and confidential. You see, MQTT relies primarily on the TLS/SSL cryptographic protocols, which are not exactly known for their strong authentication prowess.

Of course, you can introduce additional features to beef up the security provided by MQTT and protect your IoT system against vulnerabilities. Many security mechanisms on different levels can be added. For instance, you can use a firewall for broker security on the network level.

You can integrate encryption algorithms to make MQTT secure on the app level. The end-to-end encryption implementation enables confidential messaging between clients. Prevent your system from unwanted access by accessing a token to identify clients.

For further improving authentication, modify the protocol and the broker. Since an off-the-shelf broker cannot be changed, deploy your own and customize it however you like.

IoT apps that use MQTT protocol

MQTT is an easy-to-implement and flexible technology that enables effective communication within the IoT system. There is no doubt many popular IoT apps are using the protocol. Let us study a few of them: 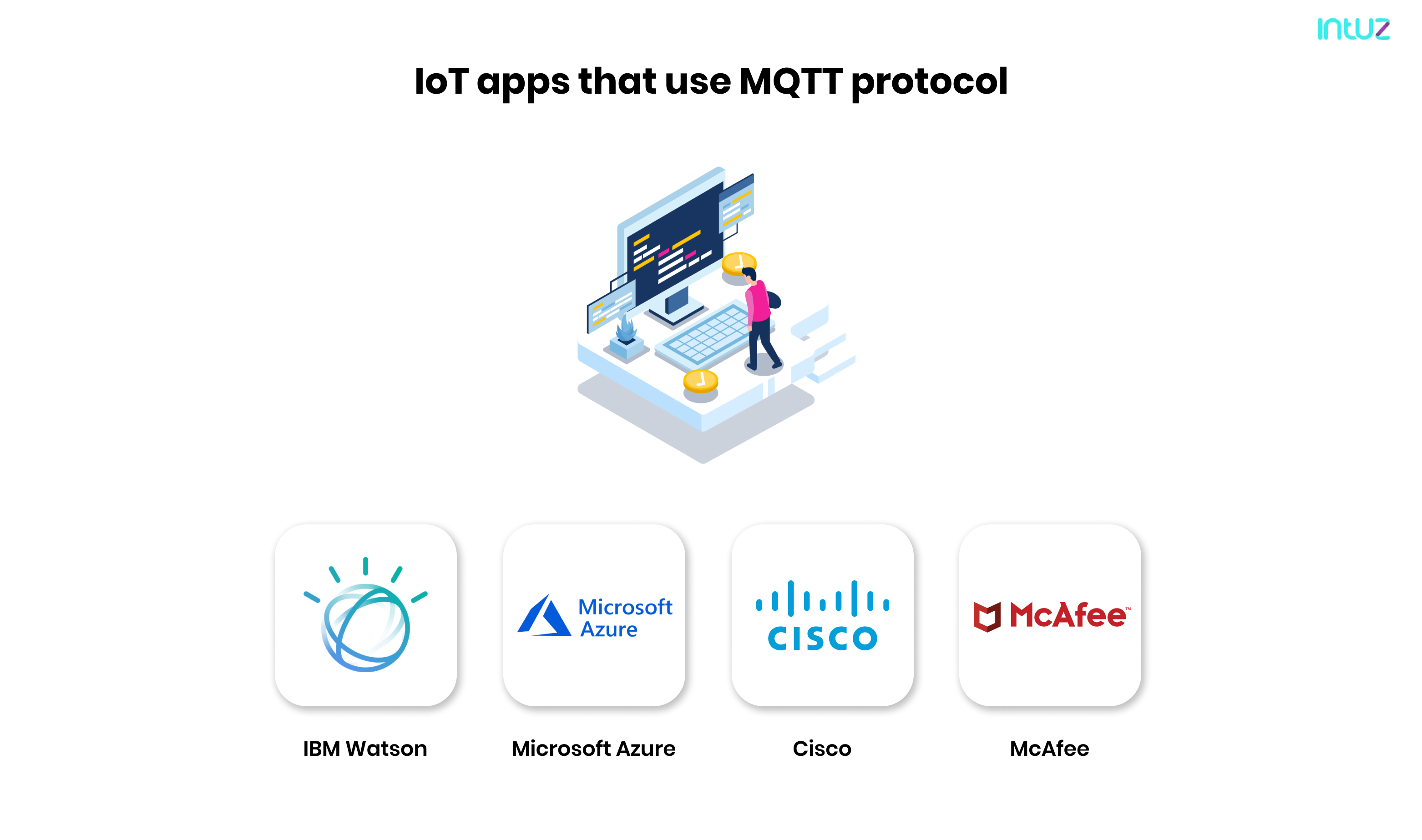 MQTT alternatives to know about

The sign of a well-functioning IoT system is how well its devices communicate with each other. This is only possible by choosing a suitable IoT protocol. MQTT is indeed a fantastic option for the same. However, there are alternatives to MQTT: 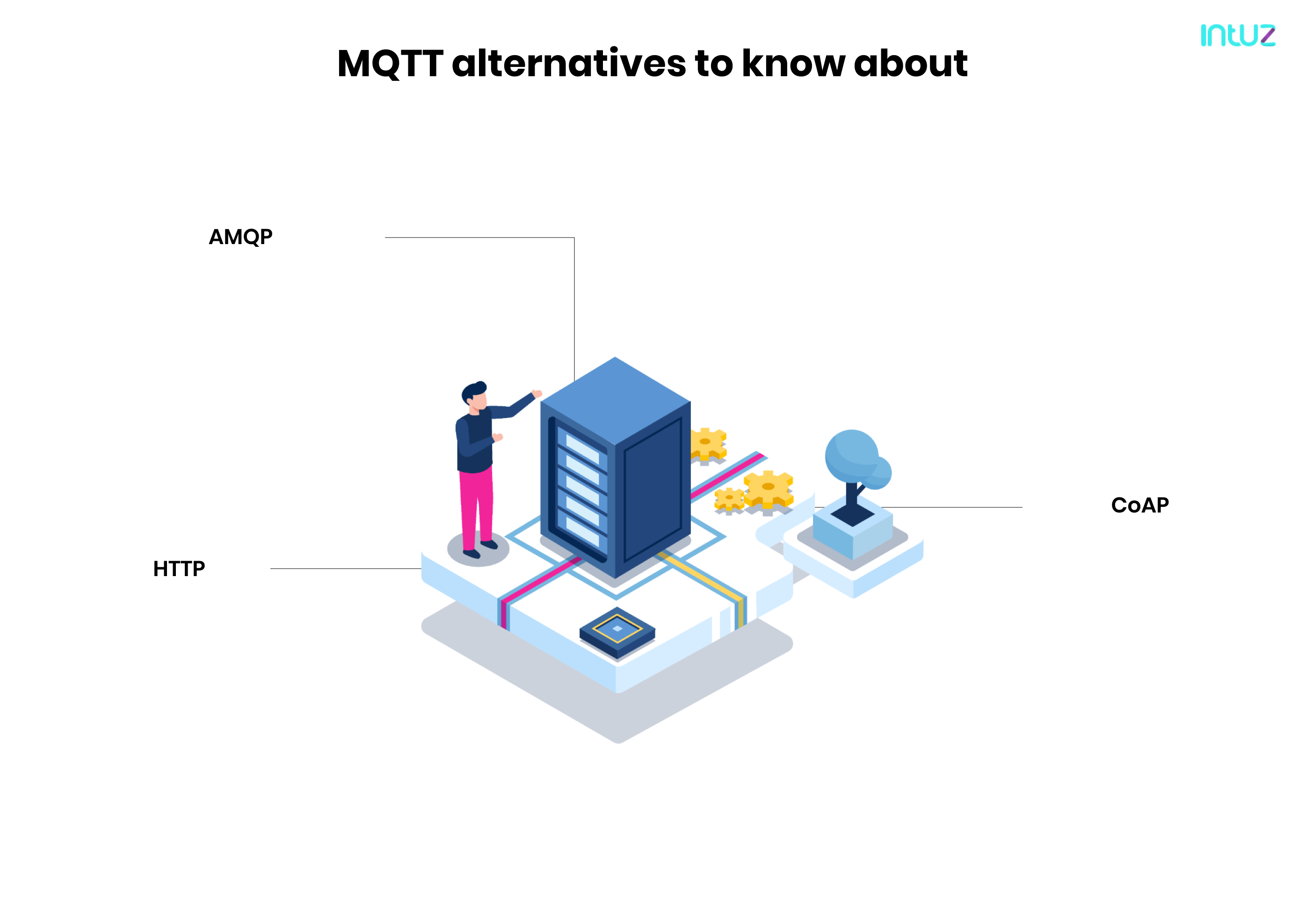 AMQP was created by JP Morgan Chase & Co in 2003 as an open-messaging protocol for specifically banking systems. It is a TCP-based protocol that performs both publish/subscribe and request/response types of communication. Here are some of its features:

A web protocol, the history of HTTP dates back to 1989, although it was not until 1997 that W3C and IETF established it. It uses TCP/IP as transport protocols and is often used with HTML to communicate with the browsers.

HTTP is a text protocol working on a request/response model. A client sends a request to the server, and the server sends back a response. Here are its features:

CoAP is short for Constrained Application Protocol which IETF created. It is a UDP-based binary protocol and has a lot in common with HTTP. In fact, both protocols work reliably with each other. CoAP is known for supporting two forms of communication:

Here are its features:

Because it runs on UDP, CoAP shows no signs of guaranteed delivery. It, however, uses non-confirmable and confirmable messages, which works for devices that have been engineered for fulfilling specific purposes only.

What does the future of MQTT hold?

In all fairness, security will continue to be the biggest challenge for the IoT ecosystem. We need systems in place that know how exactly to configure secure production environments. MQTT is one protocol that will continue to be a part of the current IoT revolution because it is so easy to use and simple to understand.

No wonder the level of interest in MQTT has increased by 4X globally in the last five years. The rise is because of the high-speed expansion of the IoT market and a consistent liking towards resource efficiency and simplicity.

Thanks to its easy implementation, reliable message delivery, basic but robust architecture, and high scalability, the interest in MQTT is always going to be high. In 2019, OASIS released the latest version of the protocol called MQTT 5.0.

Some of the new features added to the mix include topic alias, shared subscription, and message expiry. MQTT has caught the eye of more IoT app developers because of the plethora of new functionalities that it has to offer.

Understanding the basics of AQMP

The first version of the AMQP protocol was intentionally agnostic to the legacy messaging system topologies. Even today, it is used as the primary protocol in many messaging brokers, which are built with a specific notion about the internal broker architecture.

However, AMQP has its disadvantages. For starters, it does not allow the creation of subscriptions in message streams and does not enable publishing a message stream to expect subscribers.

To do that, you first need to establish a link, allowing flow over it and then transfer the message. It also does not have any semantics built-in, so a broker cannot scale better or worse as a matter of principle.

Despite the cons, it is still a robust and compact (if not versatile) message-transfer protocol much-loved in the IoT ecosystem. AMQP offers more opportunities in every direction because it does not impose a specific structural model.

Moreover, AMQP rewards longer sessions by anchoring the target web address for the transfer on the link. It does not focus on the individual transfer operation. Let us check out some of the critical capabilities of the protocol. 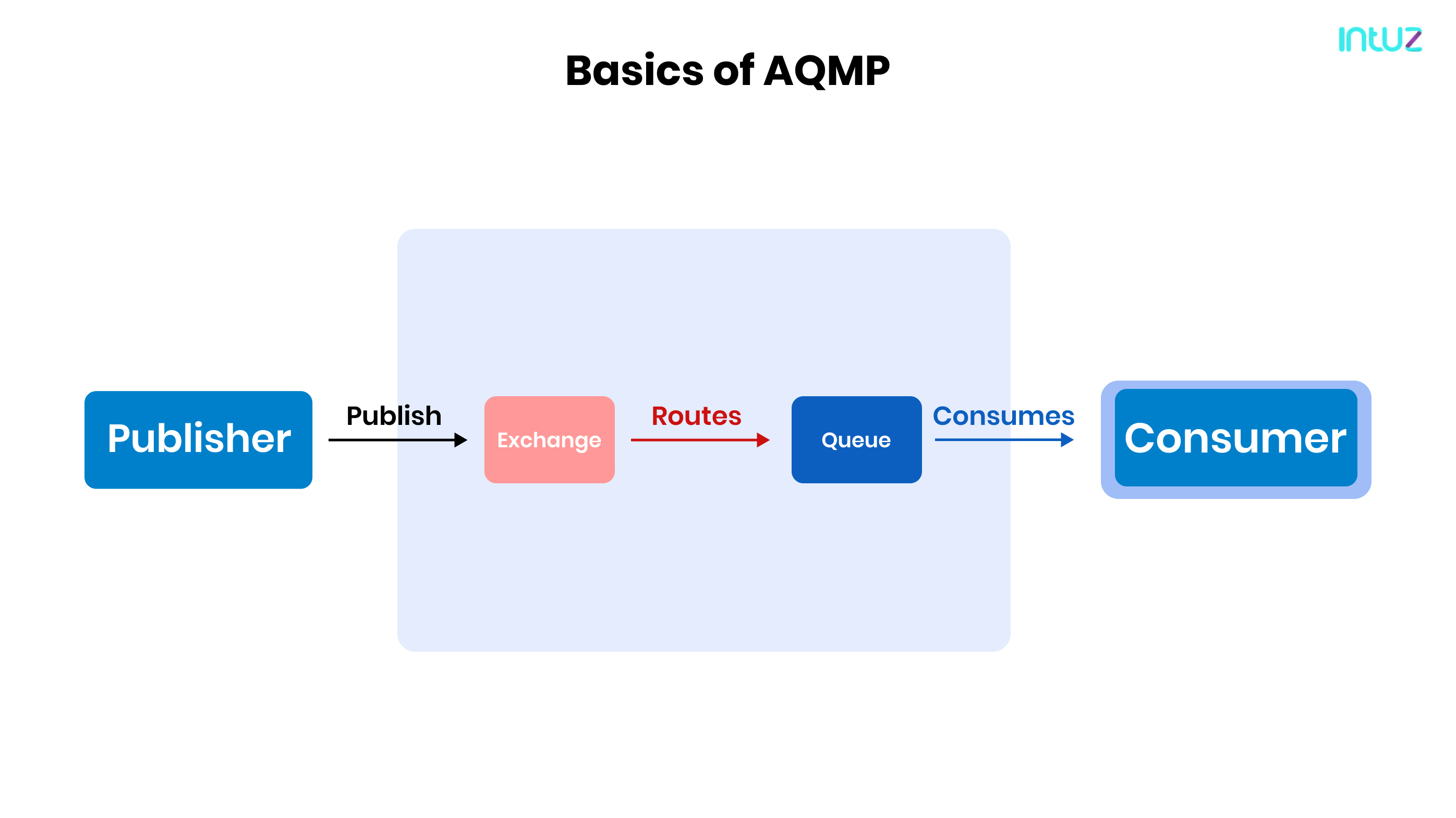 AMQP can easy connect across:

AMQP-enabled applications provide bi-directional connectivity, several variations in publish/subscribe topics, access to queues, and universal routing brokers across many vendors. The protocol is a headstrong alternative to MQTT, and for a good reason.

MQTT vs. AMQP: The ultimate comparison

Competing use cases of MQTT and AMQP

Though both the protocols come with their pros and cons, it is worth noting that some exceptional use cases overlap between MQTT and AMQP, namely:

1. Bi-directional communication between a backend system and devices

MQTT and AMQP are session-oriented protocols that can be used when a client wants to connect to the backend and when that connection remains solid for ongoing communication with the same client.

The only difference is the level of flexibility between the two protocols. While MQTT shows some inherent client/server bias based on who initiates the connection, AMQP is fully symmetric and permits the server and client to communicate from either direction.

MQTT is well-suited for telemetry transfer because the protocol is lightweight and compact. On the other hand, AMQP enables the same transfer reliability as it allows descriptive metadata to flow outside the core payload on the message frame.

The same happens with MQTT. It is just that the purpose of the payload mangles into the topic path for this protocol. The current version of MQTT does not allow communicating errors back to the publisher, which is now rectified in the newer versions.

Despite the differences, many large IoT systems like deploying a combination of the two protocols. Although AMQP is versatile and used for different messaging capabilities, MQTT takes the cake for being reliable, delivering a fast response time, and supporting unlimited devices. It also has a strong developer community simplifying MQTT protocol deployment.

Are you looking for support in choosing the best IoT protocol for your project? Do you need someone to share their guidance and clear your doubts? Intuz can help! Our knowledgeable developers have the experience of working with both protocols and on diverse IoT projects.

If you want to understand how we can support your IoT product development, share your contact details with us so that we can get back to you at the earliest.

Kamal Rupareliya, a Director of Products at Inutz, focusing on innovation through technology such as IoT, JAMStack, and Serverless Computing. He is an expert in IoT, Mobile Design, and Product Strategy, and he loves applying inventive ways to utilize technology and empathy towards creating remarkable digital software products.