Bluetooth 5.0 vs. 4.0 - A Detailed Comparative Analysis

There is no denying that Bluetooth is the most popular wireless technology used in all electronic devices today. Each year, consumers are delighted with more modern Bluetooth versions - whether it is for smartphones or the Internet of Things.

From audio streaming (in-car speakers) and location services (asset tracking) to data transfer (fitness trackers and wellness monitors) and device networks (monitoring systems) - Bluetooth has created an important role for itself in our day-to-day lives.

But such was not the case before. It was only in 2014 that Bluetooth 4.0 got an upgrade and was launched in the market with a new feature, Bluetooth Low Energy [BLE], to meet the increasing demand for wireless connectivity between small devices.

This version was geared towards apps that required lower power consumption, such as fitness wearables that transmit temperature data in small amounts to mobile phones on request. Other features of the version included low energy secure connection and link-layer privacy.

Bluetooth version 5.0 specifications at a glance

After the subsequent success of version 4.0, the market introduced Bluetooth version 5.2 on December 31, 2019. Although geared towards low-powered apps, it offers an improved BLE data rate and range - allowing devices to send even more sophisticated data to the end-users.

That makes it a clear successor to Bluetooth 4.0 thanks to its pro-Internet of Things upgrades and Bluetooth beacon . This article attempts to analyze Bluetooth 5.0 vs. 4.0, along with their variations in detail. But first, let us take a step back to study its history. 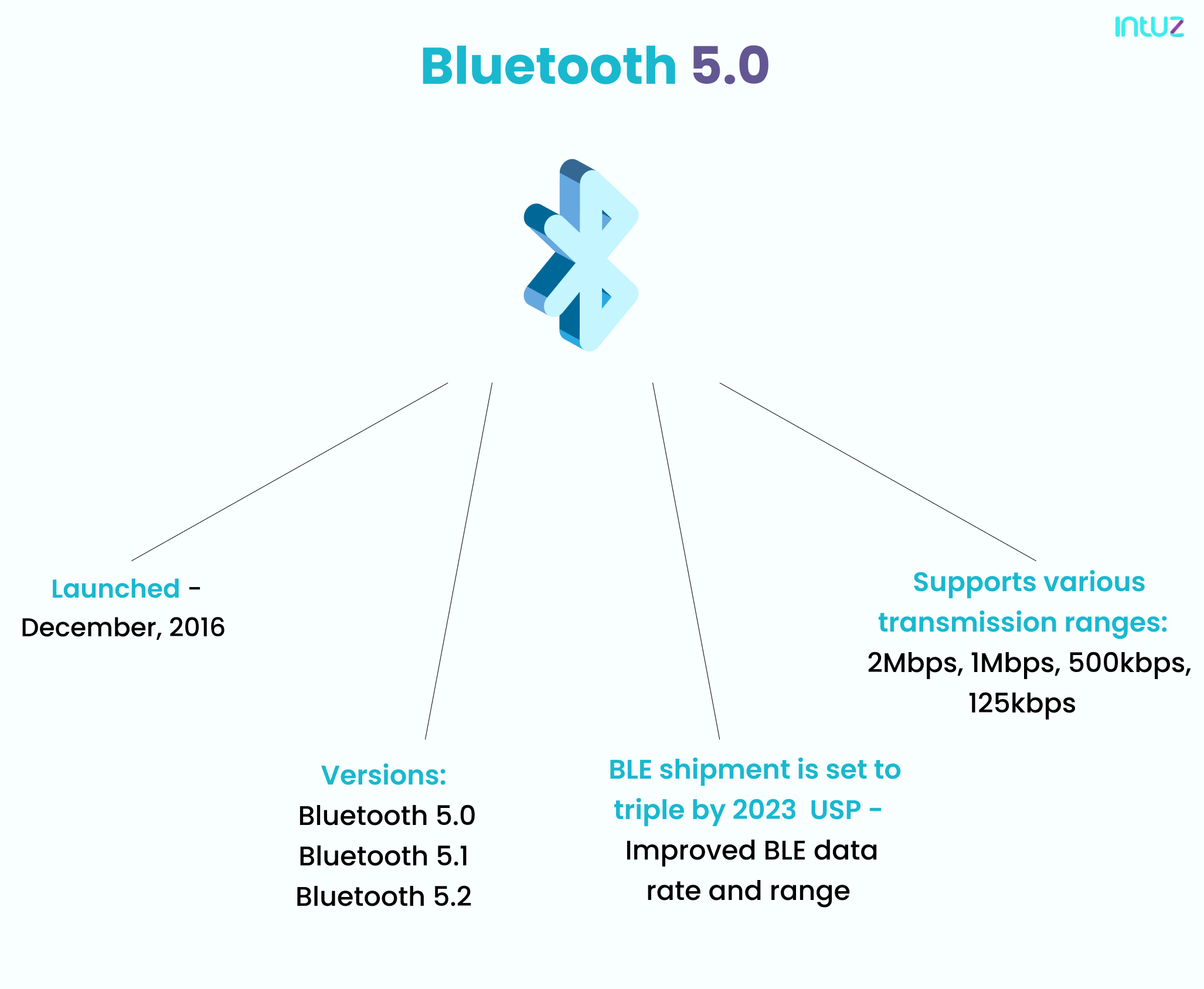 Bluetooth - how it all began

Bluetooth was invented by an electrical engineer Jaap Haartsen in 1994, while working for Ericsson in Sweden, as an alternative to the RS-232 cable standard for connecting PCs to computer peripherals.

Today, the body controls technology development, protects trademarks, and runs a management qualification program to ensure all manufacturers comply with their standards to sell a Bluetooth device.

So far, Bluetooth has released 12 versions, most of which are stemming from the same series: 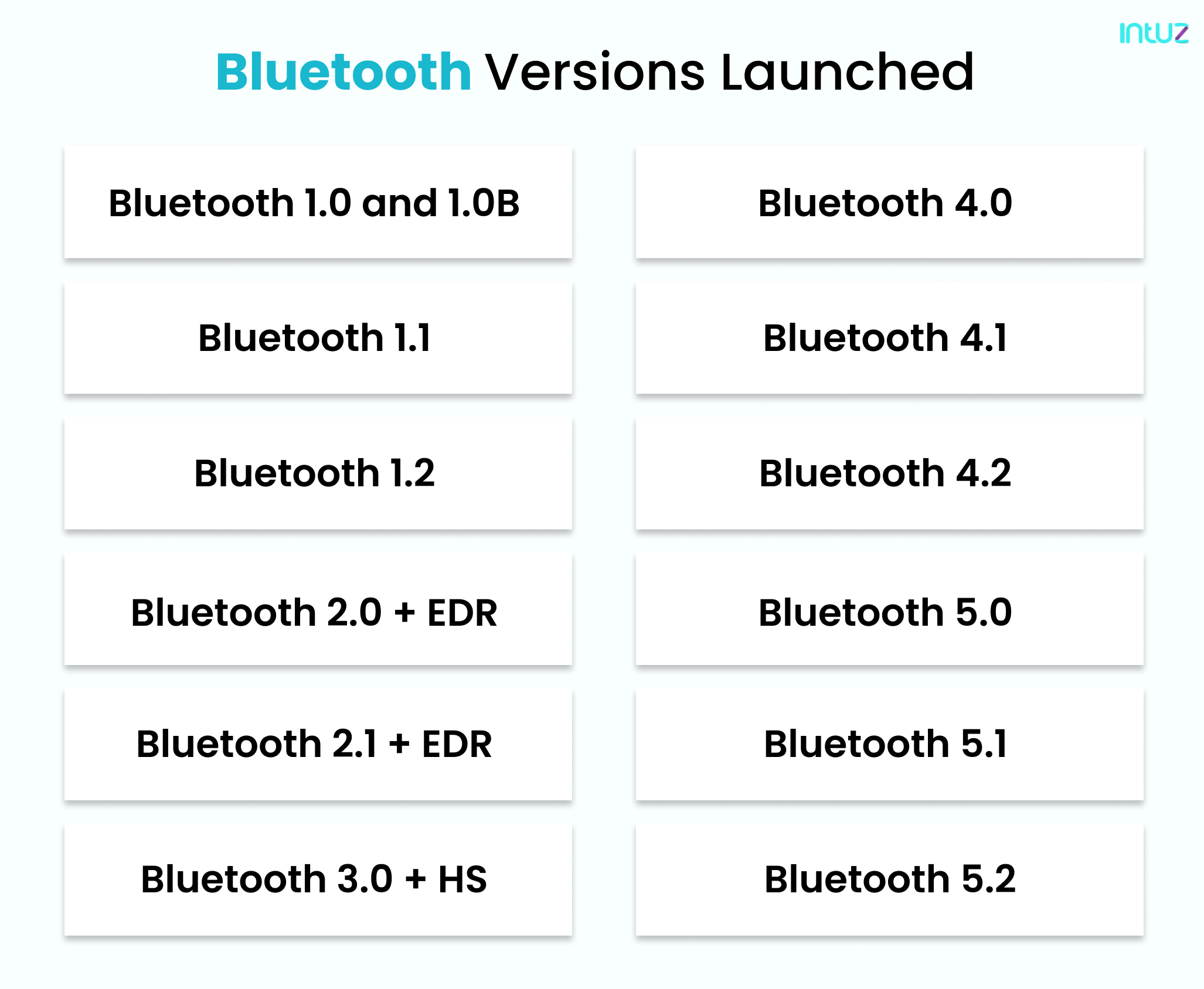 An ABI Research states that Bluetooth beacons are expected to reach a 133% CAGR between 2016 and 2021 in retail, advertising, and personal tracking sectors. In 2020, the volume of BLE-enabled devices shipped worldwide is expected to reach 8.45 billion.

Moreover, BLE shipment is set to triple by 2023, with 1.6 billion devices shipping each year. Speaking of demographics, North America has the highest rate of Bluetooth usage at approximately 40% across devices thanks to increased use of hands-free headsets, connected watches, and other Internet of Things Development.

The technology has undoubtedly evolved from connecting PC ancillary systems into a domestic IoT connectivity solution. Let us study some compelling use cases of Bluetooth.

Bluetooth creates a buzz in the market

Miami International Airport installed Bluetooth beacons to each terminal and critical areas such as restrooms and food courts. That way, travelers can download the airport app and be guided straight to their terminal from the security check-in area.

Since 2013, Apple Stores in the USA have been using beacons to communicate with users once they enter the facility and check-in for the Apple Store app's service. They are sent notifications on their Apple devices regarding discounts, sales, hot favorites, and more.

The Brooklyn Museum of Art provides guided tours through their official app. Location-based triggers serve content as visitors walk through the museum. It is an impressive way for the museum to communicate with visitors and allows the latter to interact with the exhibits of their liking.

Bluetooth 5.0 vs. 4.0 - A detailed comparative analysis

Bluetooth 5.0 was rolled out in 2016 and designed to meet all the wireless world's advanced privacy and security standards. It requires the latest hardware to run smoothly and is not compatible with its older versions, like Bluetooth 4.0. So, how do the two versions fare against each other? Time to analyze Bluetooth 5.0 vs. 4.0:

One of the most impressive Bluetooth version 5.0 specifications includes speed. It is twice as fast as Bluetooth 4.0. Clocking in at a decent 2Mbps, it can meet all the Internet of Things compatibility requirements.

A packet of data worth 251 bytes can actually be sent in 1060 microseconds compared to the previous version that recorded a set time frame of 2120 microseconds.

This shows that even though the data is sent faster, the packets' distance has not been shortened or wedged. In a nutshell, Bluetooth 5.0 is certainly 1.7X faster than BLE 4.2.

The range is one aspect that consumers would not notice audio either start cutting out or completely stops because the device is out of range. This was an issue with Bluetooth 4.0; however, the advanced technology states otherwise.

While Bluetooth 4.0 supports 10m in an indoor range and 50m outdoors, its successor supports 200m in the outside environment and 40m indoors. That shows that Bluetooth version 5.0 specifications are far superior to any versions of Bluetooth 4.0.

The advanced range means you can listen to music through your wireless headsets from your smartphone while moving around the house or garden without disrupted streaming.

As you know, Bluetooth version 5.0 specifications were refined for the Internet of Things. That means the new version of Bluetooth was designed to use less power on each device than version 4.0. For instance, all audio devices communicate over BLE, and you can switch on your Bluetooth for a more extended period without worrying about the battery running out.

How else do you think your headsets or smartwatches can sustain and go on for such long hours? Sure, the hardware has a huge role to play in power consumption. But the maximum transmits the power in Bluetooth 5.0 stands at +20 dBm while the older version was defined at +10 dBm.

Compatibility is a huge factor in technology, mainly if you deal with mobile phones or the Internet of Things. You would want to move forward with new trends and continually upgrade your various tech devices. However, that is not always possible.

You cannot just throw your smartwatch in the bin or purchase a new mobile phone only to stay in vogue! That is the issue Bluetooth version 5.0 specifications address once and for all!

Bluetooth 5 met the requirements for the Internet of Things thanks to its extraordinary range and increased speed. Its predecessor, on the other hand, gets a boot because of its speed and faulty range. Samsung Galaxy 8 and 8+ work well with Bluetooth 5.0.

However, to take full advantage of Bluetooth 5.0, you will need the new and improved gear. For instance, you might need a Bluetooth adapter to make a device work properly. By plugging into a USB port, you can upgrade your device with the latest version.

This is not the case with Bluetooth 4.0 - which won't be compatible with any version series except for its own.

When we were at the use cases section, we learned about the Miami International airport installed beacons for a better traveling experience? Well, the reason Bluetooth 5.0 beacons are so popular is because of their range and speed. However, the same cannot be said about Bluetooth 4.0, which had lesser speed and range.

Bluetooth 5.0 offers a connectionless Internet of Things, which makes its beacons so apt! It optimizes responsiveness and ensures faster and smoother connectivity. 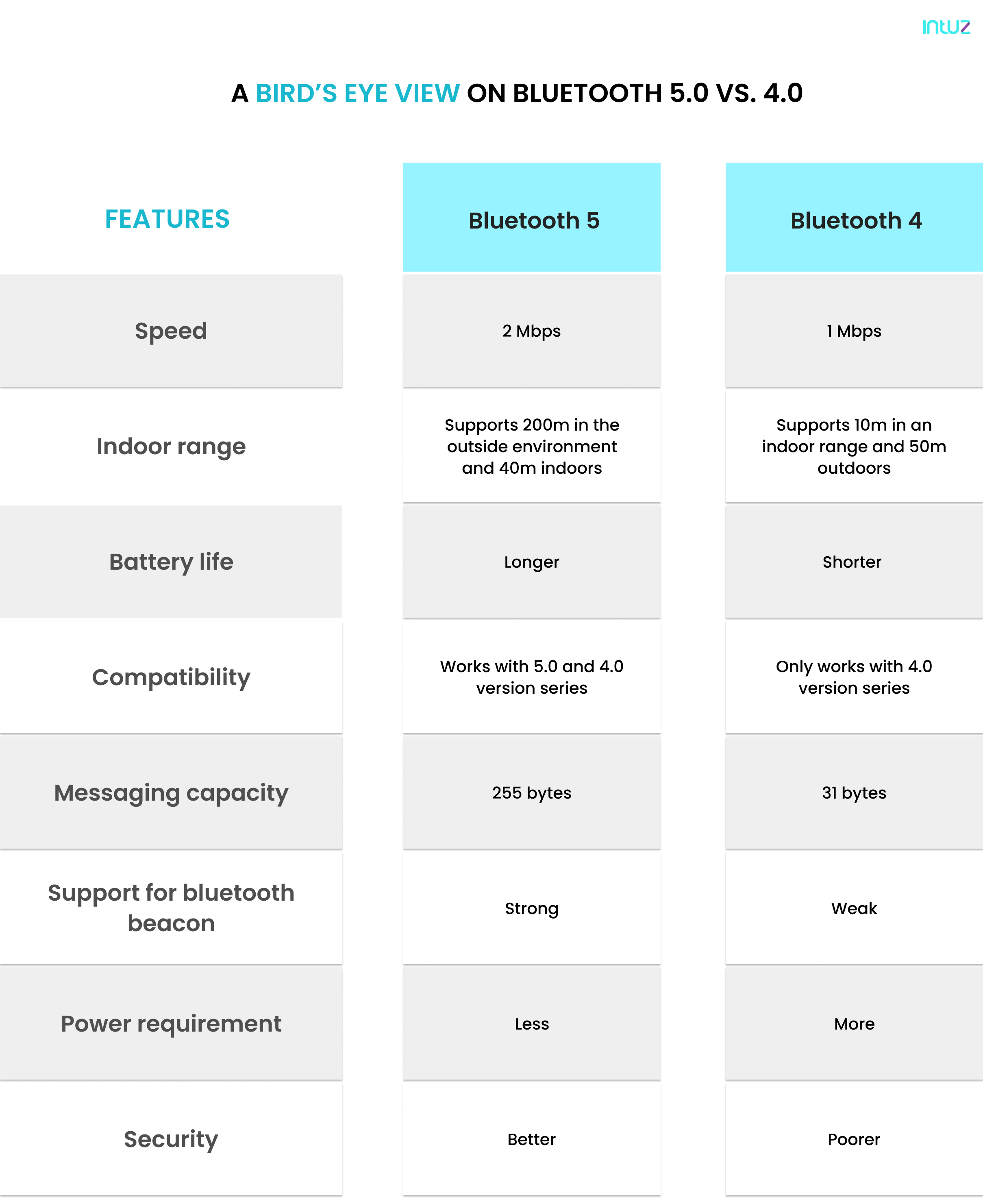 Yes, Bluetooth 5.0 is compatible with 4.0 and its subsequent versions, i.e., 4.1 and 4.2. However, the only drawback is Bluetooth 5.0 does not utilize all specifications on the device in such a case. The speed and range improvements are limited when Bluetooth 5.0 works with 4.0.

2. What Bluetooth version do I have?

3. How many devices can Bluetooth 4.0 support?

Bluetooth 4.0 is compatible with only those devices that were designed specifically for the version 4 series. Having said that, it can communicate with up to seven devices, though not all devices would enjoy the same range and speed.

4. How to check the Bluetooth version on Android?

It is easy. Simply turn on the Bluetooth mode on your device, go to “phone settings,” and select the “ALL” tab. Then scroll down the feed and click on an icon called “Bluetooth Share.” Voila! You will find the version information under “App Info.”

5. What is the maximum range of most Bluetooth 5 devices?

Bluetooth 5 supports a range of 200m in the outside environment and 40m indoors. It offers four different data rates to include various transmission ranges: 2Mbps, 1Mbps, 500kps, and 125kps. The range ensures better call quality and significantly superior performance and functionality than the older versions of the Bluetooth.

As the Internet of Things, Android app development, and iOS app development expand, Bluetooth's usage will continue to soar for days to come. One cannot imagine life without Bluetooth, is it not?

When Apple first introduced the headphone Jack many years ago, they embraced Bluetooth technology as the new audio connectivity standard. Since then the technology has evolved by leaps and bounds, and the article proves how!

Given what we have learned in our comparative analysis of Bluetooth 5.0 vs. 4.0, there is no doubt that Bluetooth 5 version series are much better than the previous versions.