Bringing Things to Life With IoT

Connectivity is the core necessity of this era.

What do you think?

Let me ask you something, why do you love your mobile so much?

Mainly, it is due to instant connectivity. Your smartphone enables you to reach out to every possibility that addresses your immediate needs. For example; are you missing your friends? Pick up the cell, call them or start chatting with them. Wanna shop pretty dress for yourself? Go to an online shopping app, look at the several options, and select the best one, place the order. You have the dress at your doorstep.

Smartphones are a very tiny part of the broad concept of Internet of Things (IoT). IoT connects human beings with the things to simplify their daily routine at the home, workplaces and public areas as well!

Wanna know how? Let’s have a drive around the world of IoT.

The basic idea of IoT is to increase machine to machine communication. IoT works with Cloud computing services and connects everything around you with the internet by using the networks of data gathering sensors. IoT based big data analytics and cloud, sensors, edge processing and intelligent gateways, and real-time synergy across disparate systems, deliver numerous possibilities of making everything “Smart” around us.

Adoption of IoT improves digitization of our society and economy by connecting people and objects with each other via communication networks. Allowing for device-to-device interaction, it enables people to manage their daily lives with more efficient monitoring and control.

Until 2003, it was considered that the Internet could be useful to people only. It was invented to improve human interaction across every corner of the world. But in 2009, various devices/machines started getting associated with the internet. Here, the concept of IoT came into existence. 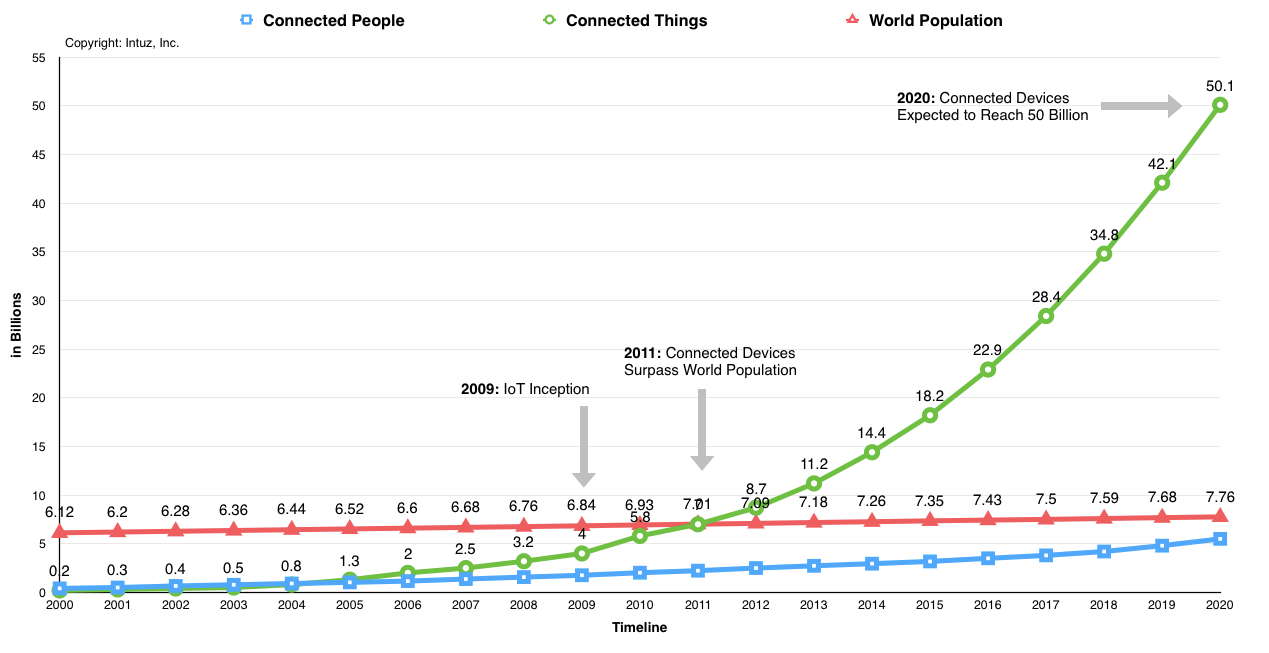 IoT simplifies our daily lives by allowing us to manage our routine tasks smoothly. Think, what happens if your daily habits such as turning lights on and off, unlocking the home door, searching your keys, etc. can be automated with intellectual software and sensors! With the smart home, all these can be possible.

Smart home contains all the products that understand your preferences, anticipate your desires and react dynamically to your behaviour. It enables you to live the life in the home instead of micromanaging your house. The most popular devices for smart home are smart thermostat, connected lights, smart fridge, smart door lock, and so on.

Smart city permits people to overcome the issues of traffic management, urban security, waste management, water distribution, environment monitoring and much more. Smart city apps are getting immense popularity as they promise to address the real pains of the people who are living in the crowded area of the city. Such apps help them in resolving various issues related to traffic, noise pollution, air pollution, etc. and make cities safer.

Wearable remains a hot topic across the tech world since the release of Apple smartwatch. Today, there are so many wearables available in the market such as fitness trackers, smartwatches, Google Glass, GPS shoes, Fin Ring and much more. Within a very short time span, wearables have started digitizing the personal space of people by influencing their daily lives. Several tech giants such as Sony, LookSee, etc. are in the race to innovate highly dynamic IoT wearables.

This is a very special category of IoT. It provides information about the consumers and electricity providers in an automated fashion. It helps in improving the efficiency, economics, and reliability of electricity. According to a survey of 2015, this concept holds 41000 monthly searches on Google. Moreover, we can find around 100 monthly tweets on this concept. So, we can say still the concept is in its inception phase as people do not have enough stuff to discuss about smart grid on Twitter.

Apart from above mentioned trends, IoT market is booming with other emerging trends such as smart retail, industrial internet, connected health, smart supply chain, smart farming, smart energy, and so on.

Though IoT is a very speedily growing concept, it still facing security and privacy issues.

Though there are several pros and cons of IoT, it is one of the technologies that add values to our lives by allowing us to manage our daily routine tasks remotely and automatically. Intuz team is passionately looking after the upcoming advancements in the sphere of IoT. Read out our articles to stay updated with latest trends, technologies, and apps in IoT.